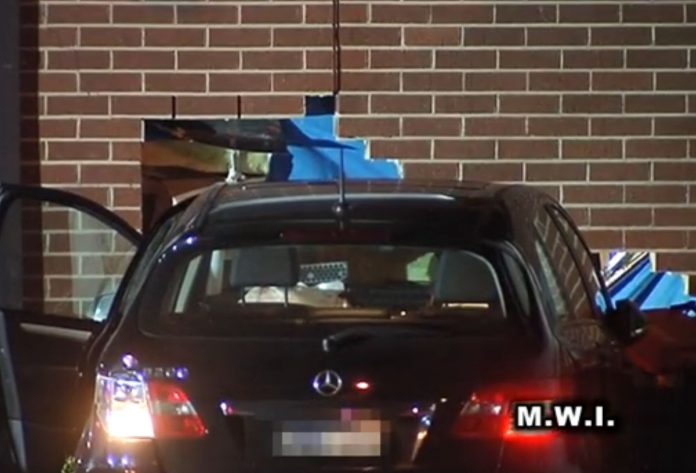 Silence was shattered last night in Harkness (Melton West) when a stolen vehicle lost control and crashed into a house.

Investigators have been told the black Mercedes Benz was travelling south on Orchard Avenue about 10:30pm when it lost control.

Investigators believe the driver has lost control of the vehicle before crashing into a house on Claret Ash Blvd.

The driver and passenger fled from the scene and are both believed to be of African appearance in their late teens or early 20’s.

The mercedes was stolen yesterday from an address in Aquatic Drive Maribyrnong at approx 1:30pm.

Three people were in the Harkness home at the time of the crash, no-one inside the house was injured.

If you have any information that my be able to help investigators, please call Crimestoppers on 1800 333 000.

Police and emergency services responded to reports of a car into a house in Harkness (Melton West) last night. Investigators have been told a black Mercedes Benz was travelling south on Orchid Avenue about 10.30pm. It is believed the driver of the vehicle lost control and crashed into a house on Claret Ash Boulevard. The driver and a passenger, both males, fled the scene on foot. They are perceived to African in appearance and aged in their late teens to early 20s. The Mercedes was stolen from an address in Aquatic Drive, Maribyrnong yesterday about 1.30pm. Three people who were inside the home at the time, were not physically injured. A gas line was ruptured in the collision.