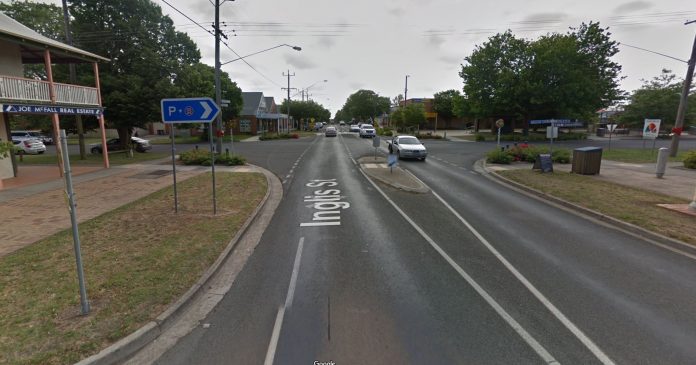 Many years ago before Ballan was by-passed, the traffic was so thick on weekends and public holidays. It was bumper to bumper from Ballan to Bacchus Marsh. They used to have to divert the traffic from the Inglis Street down Ingliston road south of Ballan.

There were 5 service stations and 4 cafes.

Every Sunday late afternoon local private contractor and his two young sons no more than 4 foot high would come along in there old Red Bedford wind up tray tip truck and empty the Inglis St rubbish bins.

Because Ballan is the centre of central Highlands and traffic used to come from all directions – Daylesford, Ballarat, Geelong, and Melbourne, Inglis St was like Bourke st. Parking was full, people in and out of cars collecting food for the long slow trip to their destination.

By late Sunday afternoon traffic slowed and thinned out so you could cross the road. The street scape was expansive, wide nature strips, wide roads, no traffic islands, no garden beds, trees spaced uniformly along the street and parallel parking to facilitate quick entry into the constant stream of traffic.

The pickings were second to none. Our rubbish contractor would save the day and bring Inglis St back to its clean expansive state.

Red Bedford on the horizon on the footpath/naturestrip creeping along at less than walking pace making sure every bit of overflow from the bins picked up and secured on the small red tray truck.

The contractor was a strong man he would grab large steel rubbish bins as if they were empty plastic buckets and with one rhythmic Tai Chi  movement upend  the contents onto the small tray with one of his 4 foot assistants scurrying around making sure all contents of the bin go to the tray.

The other young 4 foot assistant was the pilot of truck the only visible evidence he was driving a small half of a head two eyes and short outstretched arms tiny hands grasping the large black steering wheel which seemed to be the size of a wagon wheel.

Simple but effective instructions, stop, go, slower, faster. McDonald’s could learn a lot from the efficiency of this operation. Like all smooth rides there are turbulences along the way.

Because the road was busy and on occasions a distraction would occur so would a screech of the brakes, the contractor halfway through his rhythmic motion of emptying a bin and concern for his 2 assistants would throw the contents of the bin over the other side of the truck on to the nature strip, no problem the ground crew assistant would take care of the details.

Vehicle only stationary for a few seconds, very short waiting bay time here. Street pristine again. Red truck with man at the helm now and two four foot assistants at his side drive off into the distance.

This Moorabool Memory was provided by Joe McFall.