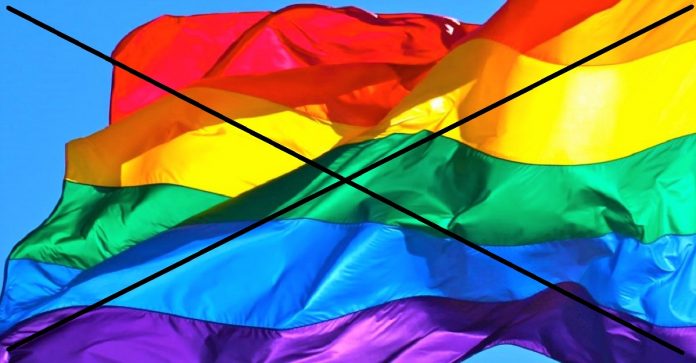 Moorabool councillors have voted against a policy that would allow the flying of rainbow flags at Council offices on IDAHOBIT Day.

Lack of community consultation was cited as one of the reasons for rejecting the policy, but no motion was put forward to seek consultation, revisit the document or move the issue forward in any way.

It means Moorabool still has no official policy on any flag including the rainbow, Australian, Victorian, aboriginal or Torres Strait Islander versions.

The document was compiled after a gay couple approached East Ward councillor Tonia Dudzik during the 2020 elections, asking for the flag to be flown.

She was the only councillor voting in support of the flag policy tonight (Wednesday).

An “against” vote was not taken.

Councillors David Edwards and Rod Ward both offered to second the motion recommending the policy but neither supported it in the final vote.

Cr Dudzik said the flag policy was consistent with surrounding councils and supported the intent of her original request.

“I was contacted by residents from the local CAFS organization which has a rainbow group within Bacchus Marsh and they were very supportive of the flag being flown,” she told the meeting.

“I was also told of students at Bacchus Marsh Secondary College (who) were very keen to see Moorabool fly the rainbow flag.

“I believe this is a procedural matter that respects all people.”

“After some thought I strongly feel that we are denying Moorabool residents their input into this discussion,” she told the meeting.

“I feel the residents of the Moorabool Shire deserve the respect and courtesy of their voice being heard.

“In past meetings I have expressed my concern related to the costs of report writing, internal costs and the cost itself of community consultation.

“So again with all things considered, I feel the Moorabool community’s voice must hold precedence, so I am not convinced this is the right recommendation.”

Mayor Tom Sullivan said the policy needed at least four to six weeks of community consultation before any report came back to Council to be voted on.

“I believe there is a proper process. It is tried and tested. It follows good process,” he said.

“(Tonight’s motion) would deny the 35,000 residents of Moorabool the chance to have their say.

“It seems a lot of the push to fly the (rainbow) flag is coming from outside the shire.”

Ballarat man Sean Mulcahy addressed the meeting via videolink and said flying the rainbow flag would be a symbol of welcome, equality and inclusivity for the LGBTIQA+ community.

The Victorian Pride Lobby advisor said an estimated 1 in 25 Moorabool residents were either gay, non-binary or asexual.

“In my view the rainbow flag should be flown angrily at the Council offices in Darley and in Ballan on the International Day Against Homophobia and Biphobia, Intersexism and Transphobia (IDAHOBIT Day) which is on May 17,” Mr Mulcahy said.

“It would also complement the local community event A Rainbow Over Moorabool, which has been organized by community group the Moorabool Rainbow Allies.

“It is about encouraging Moorabool locals to fly rainbow flags in their home or business.”

He also spoke of the area’s ties to bushranger Captain Moonlite – who first took on the moniker after leaving a signed note at a Mount Egerton bank robbery – and was interred with a male companion.

Cr Dudzik said it was unfortunate no policy was endorsed in time for IDAHOBIT Day 2021.

“I kept my commitment to request that Council fly the rainbow flag.

“I brought it to Council.

“Every Council around us is prepared to welcome and show solidarity with the LGBTIQA+ members of our community, while there are councillors in our municipality who, despite the recommendations of the CEO, continue to harbour some outdated views about the role of a Council and refuse to fly the rainbow flag on days of significance,” he said.

“The request wasn’t for every day – and it wasn’t instead of the Australian flag – just on important occasions and to fly it proudly along with our other flags.

“People should know this is a welcoming community and the councillors’ failure to show leadership – and their failure to even follow (the Chief executive Officer) on this issue – must reflect badly on them and them alone.”