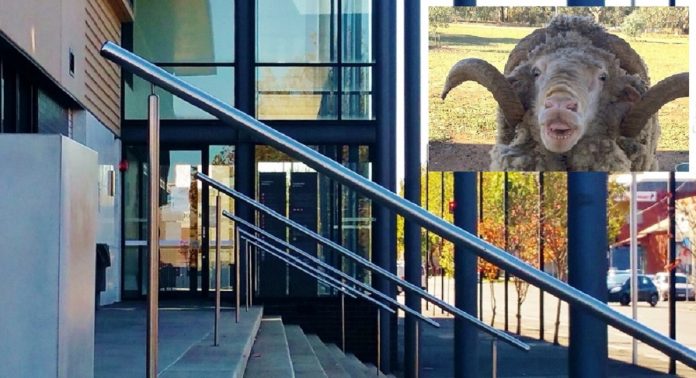 Witnesses have told the court they thought they were going to die after a Maddingley man allegedly rammed two cars and drove after an occupant fleeing on foot.

Godwin Aquilina has appeared in the Ballarat Magistrates Court today (Thursday) in one of five hearings he is involved in this week.

He is accused of using a Ford Territory to ram a Mazda and another Ford near his Love Close home just after 2.30am on 16 June 2019.

Mazda passenger Chloe Hunter told the court she had never met the accused before – but she later recognized him from media articles about a dispute over a pet Merino ram called ‘Jackie Chan’.

“I felt panic – I thought I was going to die,” she told Magistrate Letizia Torres.

“It felt like we were accelerating and going nowhere. (Our car) had lost traction.”

Ms Hunter said she and friend Jacob Camilleri were returning from Melton and were heading towards Bacchus Marsh on Geelong Rd.

She described seeing car headlights on the road 500m ahead, before noticing the car was veering towards the middle of the road.

“He clipped the Mazda, causing it to go into the gravel,” she said.

She told the court Aquilina performed a slow U-turn and rammed the driver’s side of the Mazda at 65kmh.

The court was told Camilleri’s cousin Jayden Grech was driving a gold Ford behind the Mazda – and was also allegedly rammed after stopping to investigate what he initially thought was a car accident.

“You (Aquilina) went towards the other car and rammed them clean off the road,” Ms Hunter said.

“If I was in my own little car at the time, a Suzuki, you probably would have killed me.”

The court was told Grech and Hargraves could not get out of their nearest car doors – and left via the other side of the Ford.

“I saw Jayden run to the nearest neighbours house and Cooper hide behind the car,” Ms Hunter said.

“I thought my cousin could be dead,” he said.

Ms Hunter said Aquilina then drove back inside his property.

The court was told the victims in the Mazda felt “frozen” with shock.

“(Aquilina) was screaming erratically at us – me and Jacob,” Ms Hunter said.

“He was screaming that we had robbed from him and stolen from him.

“His arms were folded and the way they were positioned, we thought he had a gun tucked in there.

“Cooper then got into our car and we locked the back doors.

“(Aquilina) was screaming at us and kicking my door. I thought he was honestly going to kill us that night.

“He was saying things like ‘I’ve got you on camera!’”

Mr Hargraves told the court that he also noticed that Aquilina had something in his hand but could not initially see what it was.

“Chloe was on the phone to police – so was Jayden at the neighbour’s house – and so was (Aquilina),” he said.

“The police said to just stay still and stay calm and don’t move.

“Later I noticed that the thing in his hand was a bottle.”

Police have alleged it was a bottle with a rag in it.

“I just was really confused because we did nothing wrong,” he said.

“I didn’t know why this was happening.”

Ms Hunter told the court she received bruising and whiplash after the Mazda was allegedly rammed and kicked.

“I was affected mentally and had to see a counsellor, for a while,” she said.

“I didn’t drive at night. I was scared to drive.

“I was fearful that he would find out where I lived and come and get me.”

Aquilina represented himself at the hearing and told the court he believed that the incident began when the Mazda crashed into his Territory.

Aquilina also questioned the witnesses about the accuracy of the distances and locations they had described to the court.

Earlier in the week he told Magistrate Torres that he had received an acquired brain injury during a truck accident several years ago.

** The case will return to Ballarat Magistrates Court on June 11.

A decision on Mr Aquilina’s other cases is also due to be made on the same day.