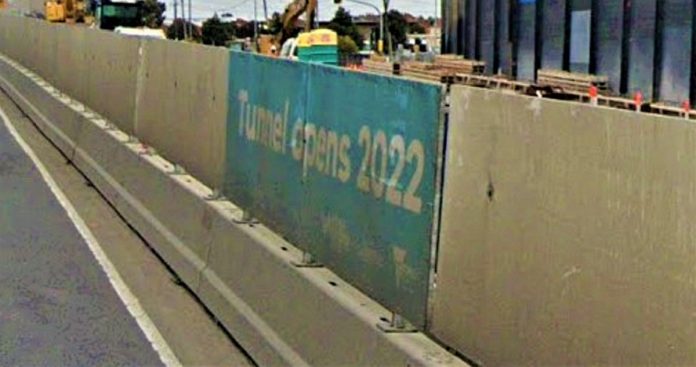 A State Government briefing has revealed that the controversial West Gate Tunnel project may not be finished until at least 2024.

“The difficult process of locating a venue for the dumping of toxic tunnel spoil is also dragging out,” Shadow Transport Infrastructure spokesperson David Davis said after Tuesday’s meeting.

“Labor’s toxic dumping site does not have the support of local communities, instead steamrolling local government and residents.”

A site at Maddingley and another at Bulla are proposed for dumping and sorting the PFAS-contaminated soil – and both will be inside the proposed boundaries of the new Federal seat of Hawke.

The tunnel itself will be located under the Coode Island chemical storage facility, where tons of PFAS-laden firefighting chemicals were used to extinguish a massive 1991 blaze.

PFAS is a man-made compound that doesn’t naturally degrade in the environment, it’s banned in 171 countries due to…

Posted by Bacchus Marsh says NO to Toxic Waste on Saturday, December 19, 2020

“The West Gate Tunnel project has been a debacle from beginning to end,” Mr Davis said.

“It’s been a special deal for Labor’s mates.  It is wildly late, with time slipping further.

“No wonder Labor has pulled down the 2022 completion banners.

“Motorists are paying through the nose every day on the CityLink roads for a tunnel that is not even built and they may never use.

“Meanwhile Labor is running roughshod over local communities, forcing toxic waste into place with a truncated and undemocratic process.

The Andrews Government has given a permit to the Hi-Quality site at Bulla, but Mr Davis said the construction of the works associated with the facility was yet to be facilitated.

The site at Maddingley is now linked to at least six recent or upcoming legal cases in the Supreme court and VCAT.