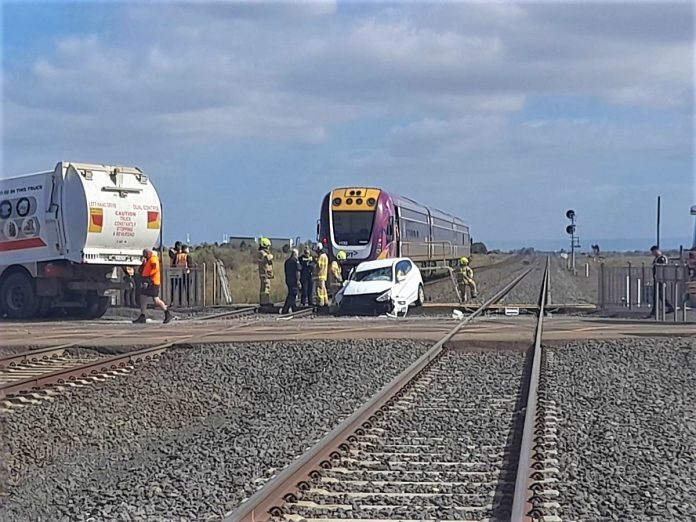 Ballarat-line trains have been disrupted and a Rockbank woman is in hospital, after her sedan collided with a Moorabool Council-contracted garbage truck, pushing it onto a Truganina level crossing.

The white Hyundai was then clipped by a Vline train a few minutes later.

Police said the Hopkins Rd accident happened around 11.30am.

The 23-year-old car driver was uninjured and able to leave the vehicle but was later taken to hospital for observation.

The 42-year-old Maddingley truck driver was also not physically injured but tested positive to drugs and is speaking with police.

Officers said the train driver and passengers were uninjured and completed their journey towards Ballarat on a replacement bus.

Coaches are replacing trains between Wendouree and Southern Cross in both directions due to a vehicle struck by a train between Caroline Springs and Rockbank. More information at https://t.co/aeewmuNrcE. pic.twitter.com/OYAKXzHkBE

A Moorabool spokesperson said they wouldn’t comment at this stage on the council-contracted truck.

The accident happened less then 3km from a major waste facility on Christies Rd, Ravenhall.

The investigation remains ongoing and anyone who witnessed the collisions or has dash-cam should contact Crimestoppers on 1800 333 000.