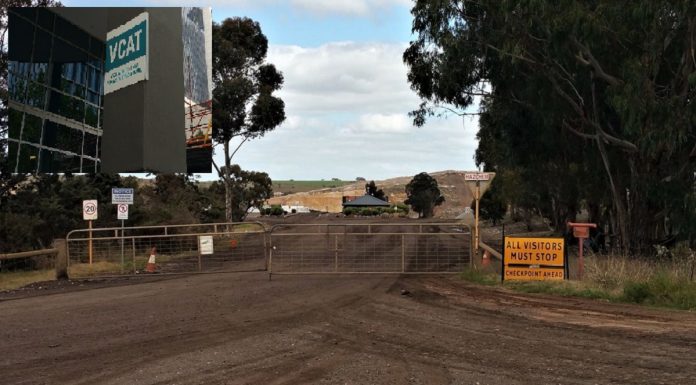 Maddingley Brown Coal’s legal team has told a hearing that confusion over dates prevented it from landscaping its Tilleys Rd landfill – and that it had kept detailed records of dust suppression work.

Little-to-no landscaping and excess dust outside the site are among a long list of alleged planning permit breaches Moorabool Council has levelled against the operators of the landfill on the southern edge of Bacchus Marsh.

An area close to the landfill is also a proposed soil processing facility for West Gate Tunnel spoil.

The Victorian Civil and Administrative Tribunal was told on day-two (Tuesday) that the date stamps of Council’s “stealth cameras” were not checked, MBC had stepped up litter patrols since the proceedings were filed – and that gates opened at the site early so trucks could line up at an internal weighbridge which opened at 6am.

Acting for MBC, Stuart Morris QC asked Moorabool Council Major Developments Coordinator Vanessa Osborn if she was aware that all trucks entering the landfill had to enter the weighbridge, which was 220m from the main Tilleys Rd entrance.

“There might be trucks on that site 24/7 but I’m suggesting to you that the operation of the landfill doesn’t commence until 6am – and until trucks containing waste go over that landfill,” Mr Morris told the online hearing.

A condition of the site’s planning permit was that the landfill “operations” were not to start before 6am weekdays and Saturdays or before 7am on Sundays.

Locals have complained to Council of trucks arriving before those times.

Mr Morris said queueing inside the property was a safer option than waiting along Tilleys and Geelong-Bacchus Marsh roads, where heavy trucks could potentially cause traffic hazards.

VCAT was also told that a Traffix Group engineers’ report concluded that trucks should be allowed to queue from 5am.

“No changes to the operating hours of the site are proposed,” the report shown to the hearing said.

“The operating hours will remain as detailed in the permit – that is, that the trucks are not permitted to pass the weighbridge or unload until 6am.”

The report included data on the number of trucks that were queued up at the opening time from 2-19 September 2020.

According to the document, on 14 September, the queue was an estimated 184m long with a total of eight trucks (one B-triple, B-double, quad-dog and compactor truck as well as four ‘walking floor’ trucks).

On September 19 there was only one truck waiting at the weighbridge – a quad-dog – needing an estimated 19m.

Ms Osborn disputed the data, saying it was compiled in the middle of the second COVID19 lockdown.

“If the gates are then opened at 5am, what’s stopping trucks from coming in at 4am?” she said.

“We are trying to ascertain what volume of trucks will be there.”

Mr Morris also questioned the timing of a landscaping plan that was formally endorsed more than 13 months after the date of the planning permit approval, despite a condition that it be finished within 12 months.

The hearing was shown the 16-page document, which had been stamped 4 December 2015 as endorsed and 1 November 2014 as having the permit approved.

“It was before my time (at Moorabool). It’s the ongoing maintenance that is the issue.

“The landscaping of the endorsed plans hasn’t been completed.

“The date doesn’t matter. It just hasn’t been done at all.”

Ms Osborn said maintenance that needed to be done included weeds, tree replacement, landscaping between existing trees and there were also areas that had not been seeded.

She also told the hearing that rabbit-proof fences had not been maintained, but Mr Morris asked her if one had been erected at all.

“It’s not a case of a fence being erected and then not maintained, is it?” he said.

“If you haven’t put up a rabbit-proof fence in the first place, then there’s nothing to maintain, is there?”

Mr Morris also asked if there was a specific condition in the planning permit that dealt with removing noxious weeds.

Ms Osborn said she did not believe this was the case, “but there is a condition that deals with the site being in an ordered and tidy state. The management plan also speaks about landscaping and mentions weeds.”

Meanwhile, she told the hearing the waste facility was a strategically significant hub.

“Do you agree that amenity is an illusive concept? It depends on the circumstances doesn’t it?” Mr Morris said.

“What’s detrimental to the amenity of a pristine residential area would not be the same as an industrial area, would it?”

Ms Osborn said her view of ‘amenity’ was based on the complaints of local people:

She said the Council had set up traffic counters on roads surrounding the landfill in 2020 because they wanted to work out the source of a sudden surge in traffic complaints.

Mr Morris also questioned if the Council knew the reason for large amounts of soil being moved around the site, what the trucks contained and if those activities were allowed under a planning permit or a landfill permit.

“Do you accept that if there was vehicular activity on the site in March 2020 that it was involved in pushing (mining-related) overburden around the site – and that it is not an activity that is within the planning permit (for a landfill)?” he said.

Photos of raised dust taken on March 27 were also shown to the hearing.

Mr Morris asked if a farm worker had spoken to her on the day they were taken.

“You just turn up – and people pull up alongside you and look through the car window at what you’re doing.”

Mr Morris showed a chart of dates to the hearing and asked if she had ever asked MBC for dust-suppression activity records.

“If I don’t know if records are being kept, I can’t ask for it,” she said.

“I don’t think it’s unreasonable for council to just ask: ‘Can you please let me know what you have done (about dust complaints)?’”