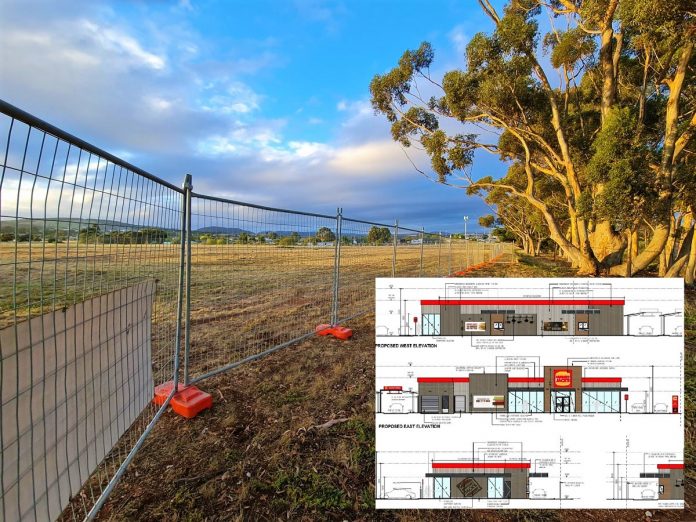 Developers have wasted no time getting on with a planned Caltex and Hungry Jack restaurant on the corner of Gisborne Rd and Clifton Drive, Bacchus Marsh.

The new fuel stop and dual-lane drive-through convenience food outlet will be just metres from the Western Freeway and is due to include the shire’s first ever electric car charging station (circled below).

It will also be the Shire’s first Caltex station – and although Moorabool is yet to gain a Woolworths, the petrol station will be the first set up to specifically accept Woolies 4-cent fuel vouchers.

Temporary fencing went up this week.

Hungry Jack’s Chief Marketing Officer, Scott Baird said the company was delighted to be setting up a Bacchus Marsh restaurant and said it would open in the second half of 2021, creating more than 50 local jobs.

The first Jack’s Cafes were launched in Canberra in 2019 and are gradually being rolled out across Australia.

“With the addition of barista coffee and our extensive breakfast menu, Hungry Jack’s Bacchus Marsh is set to be the new breakfast destination on the way to work or taking the kids to sport on the weekend,” Mr Baird said.

Hungry Jack’s Bacchus Marsh will seat up to 52 guests and will welcome guests for dine-in, take-away and drive-thru from 6am till 10pm Sunday to Thursday and 6am till midnight Friday and Saturday.

The Gisborne Rd restaurant will join more than 440 other Hungry Jacks nationwide, employing a total of more than 19,000 people. Jack Cowin opened the very first outlet in Perth in 1971.

** On 5 February 2020 Moorabool councillors rejected the initial planning application which included two restaurants on 8646m of land. At the time, concerns raised concerns about traffic, road safety and the impact on neighbours. More than 30 people lodged objections.

The immediate area is also now home to a new ambulance station, which opened in February 2020.

Moorabool Council endorsed a revised set of plans in December.

** In December 2015 a Bunnings Warehouse and other bulky goods stores were planned for the entire site and a planning scheme amendment was put forward to help make this happen.

Almost 200 objections were lodged with council and the amendment was later abandoned.

The mix of 75 double and single-storey dwellings is proposed for a parcel of land west of Caltex and Hungry Jacks.

The Murrumbeena-based owners are listed as ‘101 Gisborne Rd West PL’ and the last amended planning permit was lodged on December 9.