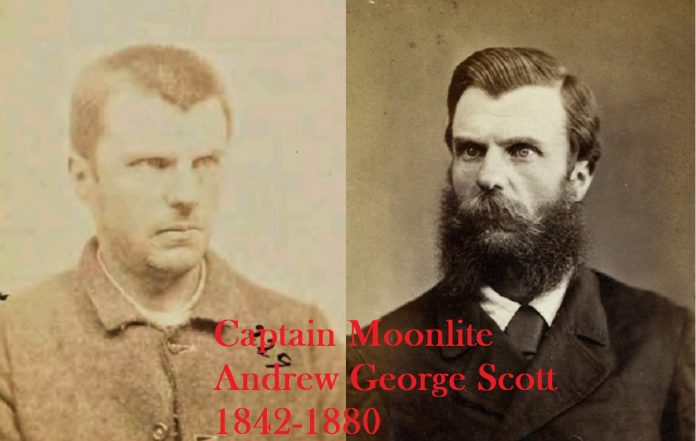 A former prison which witnessed the ingenious escape of a Moorabool bushranger has been included in a study of LGBTIA+ people in Victorian history.

Heritage Victoria and the Australian Queer Archives have launched ‘A History of LGBTIQ Victoria in 100 Places and Objects’ – a ground-breaking report related to history as far back as the 1840s.

Scott’s episode at the Ballarat Gaol effectively made him a household name at the time and led to a chain of events which historians believe indicated that he had intimate relationships with men.

The prison and courthouse – at the southern-most end of Lydiard St – were built in 1856.

Andrew George Scott (1842-1880) was a lay-preacher in the Anglican Church in Bacchus Marsh and later served at churches in Myrniong. Blackwood and Mount Egerton, where a mysterious ‘Captain Moonlite” left a florid letter after an 1869 hold-up at the Second London Bank.

According to the Guide to Australian Bushranging Scott was released from Paramatta Gaol in April 1872 for buying a yacht with worthless cheques but was almost immediately re-arrested and extradited to Victoria to stand trial, accused of the Mount Egerton robbery three years before.

The trained civil engineer and gifted speaker faced a committal hearing in Gordon and was kept in custody for a fortnight in Ballarat, where he quickly realised the prison had been erected quickly and cheaply.

On 10 June 1872, after the final 10pm inspection, Scott was able to dig out the mortar around almost a dozen bricks.

This allowed a neighbouring inmate to squeeze through.

The pair then peeled back the tin on the softwood door to reveal the lock mechanism and were able to unlock the door from the inside.

They called for a warden who they startled, struck, gagged and tied to a table.

By using ropes and standing on each other’s shoulders, the group scaled the large wall of the prison and abseiled down the outside.

From there they headed towards Sebastopol and spilt up.

The escape was not discovered until 6am.

Eight days later Scott was found sleeping in a miner’s hut in what is now the Bendigo suburb of Specimen Hill.

He had originally planned to get to the coast, obtain a boat and live in Fiji.

Other escapees were found in the Rokewood area – and one a year later in Wagga Wagga.

One – James Fitzpatrick (known as Stapleton) – headed to Mount Egerton and Bullarook before he was apprehended in a sick and starving state at Mt Bolton near Waubra.

“Escape from the building – with its towering outer walls and its panopticon design, which ensured that all prisoners could be kept under watch at all times – was said to be impossible,” study authors wrote of the gaol.

“Even the respectable press was driven to admire Scott’s genius and his leadership of the band of fellow prisoners that he led to brief freedom.

“He had already attracted the attention of the press and the public with the skilful conduct of his own defence during his trial for robbery at the Ballarat Courthouse.

“Scott’s forensic demolition of the evidence against him and his two-hour closing statement to the jury were much admired.”

But the gift-of-the-gab was not enough and Scott was sentenced to 10 years in Pentridge, of which he served seven.

It was there he met James Nesbitt, a young male companion who later joined his bushranging gang in NSW.

Nesbitt was fatally wounded during an 1879 shoot-out and Scott was hanged wearing a ring made of his hair. He also requested that he be buried next to Nesbitt. That was granted in 1995, when Scott’s remains in Sydney were reburied near Gundagai.

The study took in more than 150 submissions from LGBTIA+ and heritage communities and was written with help from the State Library of Victoria, Museums Victoria and the National Gallery of Victoria.

He said that before 1981, keeping records of a criminal relationship increased the risk of prosecution, discrimination and social ostracism – meaning much of the history was lost.

“This report is a big step towards incorporating LGBTIQA+ social history into Victoria’s heritage system and will be a valuable reference point for future management of heritage places and objects with queer histories,” the Minister said.

“Local communities will also be able to use the report to apply for heritage listings and as the basis for local history projects like history walks, commemorative plaques and art works.”

Other places and objects in the study include the AIDS Memorial Garden in Fairfield and Geelong’s Coriyule Homestead – home to ‘lady squatters’ Anne Drysdale and Caroline Newcomb in the 1840s.

“Lesbian, gay, bisexual, trans and gender diverse, intersex and queer communities are, and always have been, an integral part of Victorian social, political, and cultural life,” Mr Foley said.

“This report shows how deep that legacy runs.”