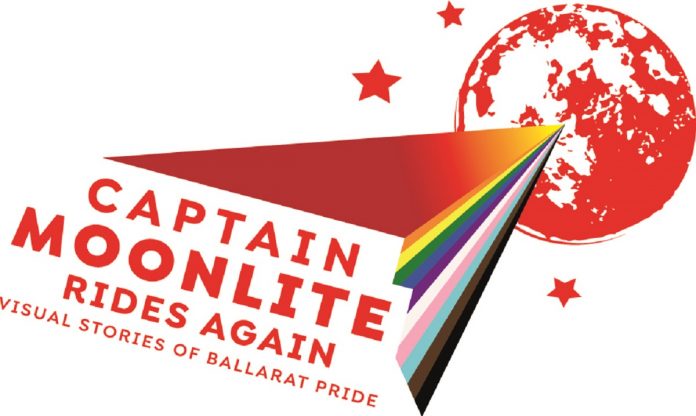 A Moorabool lay preacher-turned-bushranger will be remembered from tonight (Friday) in a lightshow projected onto Child and Family Services in Ballarat.

Ludbrook House – on the corner of Lydiard and Market streets – will be lit up from 8.30pm every night until March 25 with images of Andrew George Scott, and other artwork, as part of Ballarat Pride’s ‘Captain Moonlite Rides Again’ installation.

Tonight’s the night – the launch of 𝘾𝙖𝙥𝙩𝙖𝙞𝙣 𝙈𝙤𝙤𝙣𝙡𝙞𝙩𝙚 𝙍𝙞𝙙𝙚𝙨 𝘼𝙜𝙖𝙞𝙣 – 𝙑𝙞𝙨𝙪𝙖𝙡 𝙎𝙩𝙤𝙧𝙞𝙚𝙨 𝙤𝙛 𝘽𝙖𝙡𝙡𝙖𝙧𝙖𝙩 𝙋𝙧𝙞𝙙𝙚! We can’t wait to share this wonderful projection art installation with you. The projection video is full of images, words, videos, paintings, poetry and words that tell the moving stories of members of the local Rainbow Community. We thank our wonderful contributing artists for taking part and creating pieces that we hope will spur conversations around inclusion and diversity. The official launch of Captain Moonlite Rides Again will take place this Friday night online through @lancetvballarat and Channel 31, live streamed on Facebook through Cafs’ and LaNCE TV’s pages. Check out the video for a sneak peek! For all the finer details, click here –> https://cutt.ly/4kBxtEA #cafscares #cafsbymoonlite #projectionart #artinstallation

During the 1860s, Scott was a fill-in preacher at Anglican churches in Bacchus Marsh, Myrniong and Mount Egerton – where he was linked to a mysterious bank robbery in May 1869.

He also spent time at the old Ballarat Gaol (now Federation University’s SMB campus) – from which he managed to escape with another prisoner, by removing bricks and tying up a warden.

Scott was caught and served seven years of a 10-year sentence at Pentridge.

He later ran lecture tours on the topic of prison reform – and teamed with James Nesbitt who he had met in jail as well as four other youths aged 15-21 who joined Scott as he then turned to bushranging in NSW.

Nesbitt was fatally shot during a hold-up near Gundagai in 1879.

Two months later Scott was hanged in Darlinghurst wearing a ring made of Nesbitt’s hair.

“My dying wish is to be buried beside my beloved James Nesbitt, the man with whom I was united by every tie which could bind human friendship,” he wrote in a death cell letter.

“We were one in hopes, in heart and soul and this unity lasted until he died in my arms.”

The pair were buried separately until 1995 when Scott’s remains were shifted from Sydney to Gundagai.

‘Captain Moonlite Rides Again’ will be launched from 9pm (Friday) via a LaNCE TV live-stream on Facebook and Channel 31 community television.

CAFS Chief Executive Wendy Sturgess said the project steering group had used Captain Moonlite as a creative catalyst for the project as he was arguably one of the region’s first LGBTIQ+ community members.

“As a proud LGBTIQ+ ally, CAFS is hosting this installation to facilitate inclusive conversations, encourage positive behaviour change and bring the community together,” she said.

“The video projection is a very moving collection of images, words and visuals from our local LGBTIQ+ community, who have created beautiful representations of their experiences and stories.

The projection will be screened on the Market St side of the double-storey CAFS office at 115 Lydiard St North.

COVID-safe regulations will be in place.

** Got a news story? We’d love to hear from you: news@mooraboolonline.com.au