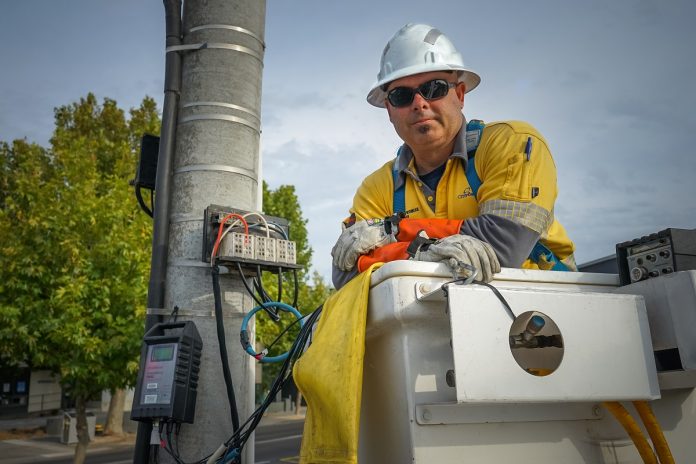 If your solar inverter has been conking out for no apparent reason, Powercor wants to hear from you.

High voltage levels have been recorded across the region – including suburban areas of Bacchus Marsh, Ballan and Gordon – where sunny days, tons of panels and low use of appliances has resulted in too much of a good thing.

As a self-protection measure, the inverters are designed to switch themselves off until the sun shines a little less brightly, a few more energy-hungry air-conditioners are switched on – or the existing voltage is reduced along the powerline.

Over the next four months, Powercor will carry out significant upgrades of areas with strong solar rooftop penetration.

They include Bacchus Marsh, Melton, Ballarat, Bendigo, Kyneton and Werribee.

The Solar Hotspots Program will ensure that rooftop solar operates more efficiently for an estimated 50,000 customers, with ‘tripping’ reduced.

General Manager of Powercor Electricity Networks Mark Clarke said over the last 18 months, the rate of new applications for solar connections in central and western Victoria had more than doubled.

“In the hotspot areas, more than one in three homes has solar connected, so our program of works is important in helping these customers make the most of their investment,” Mr Clarke said.

“We recognise the future of energy is being driven by customer choices and we have a big role in enabling them.”

This includes working on the poles and wires to make sure the voltage is well balanced across all powerlines and changing the settings on major transformers in zone substations to reduce the overall voltage levels.

In association with this work Powercor said it had also reviewed the technical assessment used to guide export agreements with customers.

He said this had been updated to include all network upgrades and aims to enable at least 80 per cent of new applications to export 5kW.

Powercor will invite some currently constrained solar customers to apply for a new export agreement:

“We do not prevent customers from installing rooftop solar but we have a responsibility to all our customers to make sure any excess electricity is safely exported into the network,” Mr Clarke said.

Until the issue is dealt with, it may mean that the solar electricity that householders are trying to put back into the grid just isn’t making it – and the chance to reduce power bills is lost.

Powercor said Australian voltage was set at around 230 Volts. Supply can vary but it can never legally and safely exceed 253 Volts.

Too high – and appliances will break.

Too low – and you’ll get a brownout.

** Scott Bailey from Bailey Technologies said it was an issue they came across from time to time, especially in older inverters, established areas and during weather that was sunny, but not hot enough to warrant a power-sucking home cooling systems.

“It can get really bad in Gordon but I’ve seen it happen in parts of Melton too,” the Ballan-based electrician said.

“It can also be really localized – depending on the type of transformer you have nearby. It might be supplying just a handful of streets.

“Under Australian standards, solar inverters need to switch off as a self-protection measure when the voltage gets too high. It’s also to protect the grid itself.

“If the voltage is too high in your street, electronic goods like computers are always the first thing to get damaged.

“The size of the cable used in the solar installation could also be causing high voltage issues.

“There are many many variables.”

He said people installing solar panels and inverters should check that a licensed electrician would be inspecting the site in person – and not solely checking via a website such as Google maps.

“With solar so popular, it’s now got to the point where Powercor had been rejecting some streets for solar approvals.

“It’s always less of a problem in the newer estates because they use auto-transformers that can self-adjust.

“The more established areas may have fixed voltage transformers – and they can have issues.”

“I know there is nothing more frustrating than trying to save money on power bills and you can’t export your energy into the grid.  I’ve seen some inverters shut down for three or four hours a day.

“The first point of call is always to contact the original solar retailer. If that’s not possible, contact someone like ourselves to have a look. It’s often a problem that’s quite fixable.”

He said March and September were ‘peak season’ for solar inverters shutting themselves down.

“It’s more commonly a problem on a beautiful sunny day – say 25 degrees – when it’s not hot enough to use the air conditioner.

“When it’s 35 and people start using their colling systems, there is more demand for power and high voltage is less of an issue.”

** During the Solar Hotspot Programs, some customers may experience planned outages to allow crews to safely conduct their work. Powercor will directly notify customers well in advance of any planned outages.

RELATED STORY: Laser beams from the sky over Moorabool