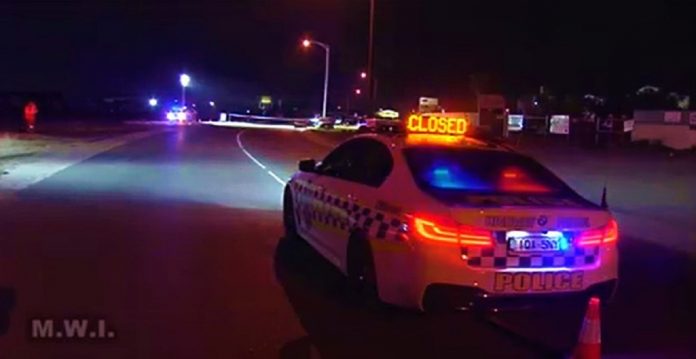 A man has been killed and another seriously injured after an overnight drive-by shooting in the City of Melton’s far east.

Police said at least four shots were fired from a moving vehicle outside a pool hall in Westwood Drive Ravenhall around midnight.

The shooter is still on the run (5pm Sunday).

Vision at the scene at a shooting in Ravenhall overnight, 28.2.21

Emergency services found an injured man at the scene. The 24-year-old was taken to hospital with serious lower body injuries.

Officers said that shortly afterwards, another man turned up at a local hospital with life-threatening injuries.

The 33-year-old from Deer Park has since passed away.

Nine Radio is reporting that he was a father of five.

Detective Sergeant Simon Quinell said it is understood there were at least two people in the car – and police will still trying to get a clear description of the make and model.

He said the victim had been inside the pool hall, which was at COVID-safe capacity. Several people were waiting outside.

Homicide Squad detectives and local police have spent the day on the scene and have cordoned off the area.

A nearby section of Westwood Dve has also been blocked at Ravenhall for several weeks due to a rail crossing removal project.

RELATED STORY: 2 level crossings to be removed on Ballarat line

No arrests have been made and the investigation into the incident remains ongoing.

Anyone with CCTV or further information should call Crime Stoppers on 1800 333 000 or visit www.crimestoppersvic.com.au