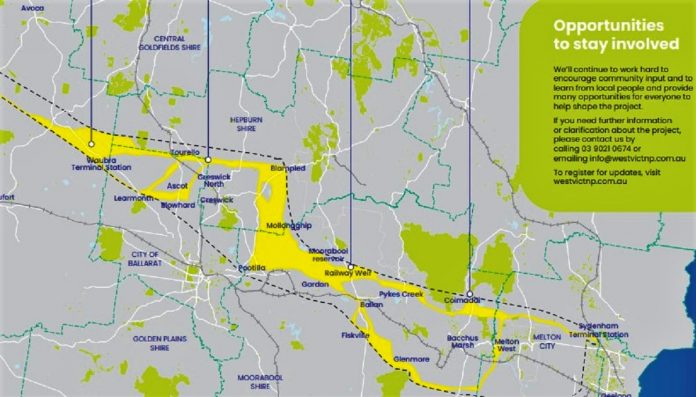 AusNet Services has announced what it calls “corridors” for further investigation and consultation for the Western Victoria Transmission Network Project.

The 190km high-voltage transmission line will stretch from Sydenham to Bulgana (near Ararat). The 500kV line will include pylons up to 80m high.

As part of developing the project, corridors have been narrowed from the broad area of interest after thousands of submissions and representations from the local community.

“The priority for identifying the corridors was to minimise and mitigate the potential impact of new infrastructure on the environment and communities,” a spokesperson said.

“Over the coming months, there will be further community consultation and investigations in the corridors, with a final corridor anticipated to be announced by mid-2021.”

The aim of these groups is to improve communication between the communities and the project.

Members will be selected based on merit, skills, expertise and evidence of connection to the community.

“We’ve heard the concerns and valuable insights from the community and taken these into account alongside the technical studies as we narrow down the area of interest,” she said.

“We encourage continued community input as we further investigate these corridors so that we can deliver this critical infrastructure with the least amount of impact.

“Everyone in the community can help shape this project, which is why we are inviting nominations for the three Community Consultation Groups.

“These groups will foster collaboration and further support the flow of information to the community about the project.”

Details of upcoming face to face community drop-in sessions will be announced next week.

** Moorabool and Central Highlands Power Alliance President Emma Muir said she was gutted about the refined map, as their home was in a narrow corridor and would almost certainly be affected.

“This map makes it real,” she said.

“We’re disappointed that the alignment is exactly where we thought it would be, but we’d also like to see a more detailed map that gives everyone absolute certainty.

“We want this project sent back to AEMO to be reassessed because in the 21st century, lines should be put underground.”

People wanting to join must have some expertise in the area, lodge an application with referees and will be selected by the developers.

“We’re really concerned for people’s mental health at the moment.

“My husband just can’t get out of bed.”

** Ausnet said the Western Victoria Transmission Network was critical to unlocking vast reserves of renewable energy and new jobs, but community lobby groups argue the lines should go underground because they will destroy wildlife, cause health effects, carve up farmland with large easements and devalue property.

For further project information, or to nominate for membership of one of the three Community Consultation Groups, visit www.westvictnp.com.au, email info@westvictnp.com.au or call 03 9021 0674.