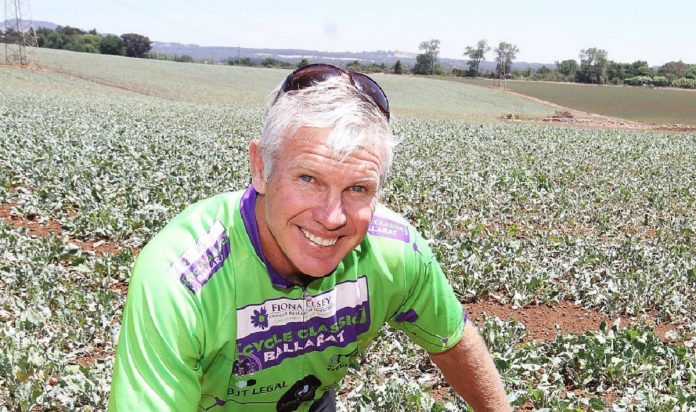 ** Some readers may find the details of this story disturbing **

The State Coroner says research into the impact of contact sport on the brains of AFL players could save lives.

The recommendation follows an investigation into the suicide of former Saints player, coach and commentator Daniel Frawley on Old Melbourne Rd, Millbrook on 9 September 2019.

The Coroner found that Danny was driving at a minimum speed of 132kmh and had both hands on the wheel of his Holden Colorado at the time of his impact into a large gumtree between Chapman and Ryans roads.

The coronial investigation established that the 56-year-old had a history of mental health issues and in the period immediately preceding his death had experienced personal and professional stressors and an exacerbation of the anxiety and depression he had been suffering for at least five years.

Tune into my passion project, No Man Should Ever Walk Alone on @1116sen at 9pm. All thanks to @ChemistWhouse. The Home Of Real Brands and Real Savings. pic.twitter.com/OAu6kamqzY

A post-mortem analysis of Mr Frawley’s brain by the Australian Sports Brain Bank found he was suffering from low stage (Stage 2 of 4) chronic traumatic encephalopathy – a form of brain disease linked to repeated blows to the head.

Victorian Coroner Paresa Spanos said CTE could only be diagnosed after death and was associated with mood and behavioural changes as well as occasional cognitive and memory impairment.

Mr Frawley played 240 AFL games from 1984-1995 and was captain of the St Kilda Football Club for nine seasons.

To understand the circumstances of Mr Frawley’s death, Coroner Spanos investigated his mental health treatment and the possible impact of CTE.

Her Honour found that:

** Mr Frawley’s mental state began deteriorating in the months before his death and appeared to coincide with ceasing his medication and several psychosocial stressors.

** In the weeks prior to his death, Mr Frawley reengaged with treatment and medication for his depression and his clinical management was appropriate.

**The available evidence does not indicate which specific personal or professional stressors experienced by Mr Frawley caused or contributed to his death.

** There is insufficient knowledge about the extent to which CTE produces neurological dysfunction, in part because of a lack of research in Australia and internationally.

** Like many players, Mr Frawley began his football career in his formative years, and likely experienced head trauma while his brain was still developing. As such, it is difficult to evaluate the contribution of CTE to personality, behaviours, any cognitive deficits, or emotion over a lifetime.

** As CTE can only be diagnosed post-mortem, it is impossible to establish at what point CTE began.

In light of Mr Frawley’s diagnosis of low stage CTE and its potential relevance to his death, Her Honour sought submissions on the current state of play in Australia regarding CTE and potential improvements in player safety.

The AFL Commission and AFL Players Association stated that in the decades following Mr Frawley’s career there have been significant changes to AFL guidelines to prevent and manage concussion and head injuries.

In addition, both organisations endorse the Concussion in Sport Australia Position Statement, a joint initiative by the Australian Institute of Sport, the Australian Medical Association, the Australasian College of Sport and Exercise Physicians and Sports Medicine Australia.

The position statement has been adopted by many major sporting bodies and contends that more research is needed to understand CTE – its diagnosis, impact and prevention.

Coroner Spanos said it was commendable that the AFL was committed to supporting research in this area.

To improve the safety of players engaged in contact sports, she recommended that:

** The AFL and AFLPA actively encourage players and, their legal representatives after their death, to donate their brains to the ASBB for research into CTE.

** From now on the Victorian Coroner and the Director of the Victorian Institute of Forensic Medicine will identify cases where there is a history of head trauma. They will also examine the brains of relevant people to determine whether CTE was present.

** Protocols will be put in place to ensure that appropriate samples are retained to assess for CTE changes without the need for long term custody of the whole brain.

The Coroners report said Mr Frawley was a physically fit and strong man during his playing and coaching years, but at the time he died he had a known medical history that included heart disease, high blood pressure and depression.

The report said brother Michael Frawley signed the document of formal identification at the Coronial Services Centre – and that Dr Linda Iles from the Victorian Institute of Forensic Medicine conducted a partial autopsy confined to the head, two days after the crash.

Dr Iles said there were extensive injuries to the head, neck, chest, abdomen and brainstem – and that death would have been “inevidible” and “rapid”.

There was no evidence of braking or steering changes and the report said cuts to the front of the shoulders suggested Mr Frawley’s hands were on the steering wheel on impact.

No alcohol or illicit drugs were found in Mr Frawley’s system, but there were several prescription medications including desmethylvenlafaxine and dothiepin (anti-depressants), olanzapine (mood stabilizer) and zoplicone (an anti-insomnia drug).

His case was de-identified and referred to the Boston University CTE centre for a second opinion, where a similar diagnosis of CTE was detected.

“Between 1996 and 2000 Mr Frawley was a coach for the Collingwood AFL team and then was appointed senior coach of Richmond where he remained util 2004,” the Coroner said.

“Towards the end of his tenure at Richmond issues arose that led to Mr Frawley being attacked in the press and heckled by crowds, which caused him significant distress.

“Mrs Frawley first noticed symptoms of mental illness once her husband finished up with the Richmond football club.

“He began a radio commentating career and later became the Chief Executive Office of the AFL Coaches Association.

“Mrs Frawley felt that on the one hand Mr Frawley’s exit from Richmond had left him with low feelings of self-worth and o the other hand, his media career fed his ego and feelings of self-importance.

“In her appraisal, this led to wildly oscillating moods that were only seen by his family.”

The report also said that in late 2018 Mr Frawley reduced the dosage of a prescription medicine and his psychiatrist warned him against doing this. He otherwise reported “feeling fine”.  Mr Frawley was due to attend another appointment in February 2019 but cancelled, saying he would make another one when he needed it.

At Mrs Frawley’s behest, he attended another appointment in August 2019.

“Mr Frawley reported having taken himself off all medications in December 2018 and increasing alcohol use.

“He reported having significant stressors in his life at that time and felt his star power dimming with the emergence of new media personalities.”

The Coroner noted that Mr Frawley attended an appointment with his psychiatrist three days before his death when he “vehemently denied any active suicidal intent or plan.”

During the visit Mr Frawley also declined an admission to hospital to address his poor sleep and overall mental state.

“The doctor was also of the view that Mr Frawley did not meet the criteria for an involuntary admission and appeared much the same as he had in the preceding five years.”

The day before his death, the report said Mr Frawley celebrated his birthday with family and friends “and appeared happy spending time with them”.

Mr Frawley returned a call from his mother around midday on the day of his death, saying he would come over the next day for dinner.

“Shirley Frawley felt her son sounded well and did not notice anything amiss,” the report said.

At 1.40pm, a woman driving on Old Melbourne Rd, Millbrook noticed motor vehicle debris and found a severely damaged white ute near a large tree. She saw that the driver was motionless and called emergency services.

The Police Collision Reconstruction and Mechanical Investigation Unit found that the Holden Colorado would have been travelling at a minimum of 132kmh when it struck the tree and that the brakes had not been applied.

The report said that Mr Frawley ordinarily resided with wife Anita in Brighton but was living elsewhere in the days immediately before his death.

The Coroner said the couple had been planning to build up an equine business near Ballarat.

He was the father of Chelsea, Danielle and Keely, “and would say of his wife and children that they were his greatest achievement,” the Coroner’s report said.