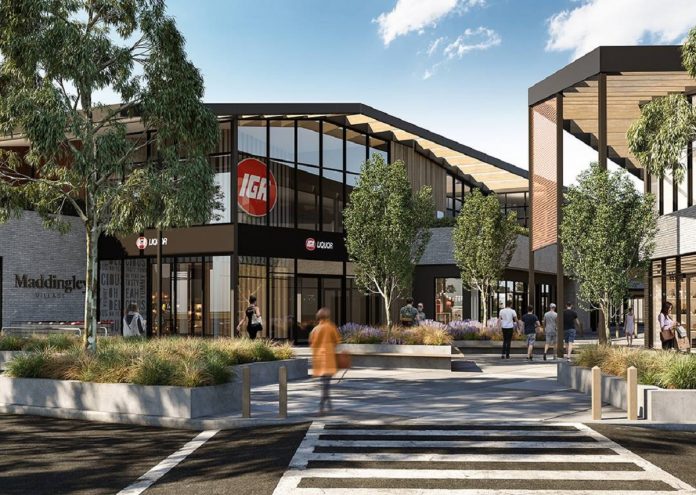 Construction will start mid-March on a Champions IGA, learn-to-swim centre, retail shops and around 30 townhouses on McCormacks Rd, Maddingley.

The much-anticipated shopping centre – with the working title ‘Maddingley Village’ – has been more than a decade in the planning and will service people in the Stonehill and Hillview as well as Rowsley and beyond.

The townhouses will be built on a blocks facing the Bacchus Marsh West Golf Club on McCormacks Rd and the site of a future Catholic school on Gladman Rd.

Signage for the $415,000 townhouses was erected yesterday (Tuesday), sparking community fears they would replace the shops.

But Empire Properties Director Tony Masalkovski said both would go ahead.

“It’ll be a centre for the community – with playgrounds as well.

“Everything you need will be in one spot and it’ll have everything locals will need.”

He said leases had already been signed for the 2200 sq m supermarket – which will be bigger than first proposed – as well as a childcare centre, pizza parlour. Laundromat and the swimming centre.

Mr Masalkovski said the pool would have five lanes and while it was primarily for children learning to swim, it would also cater for adults at night and at certain times on weekends.

He also said some local schools had already committed to bookings for their students.

On top of that, he said the centre also had room for a gym and liquor shop.

“The centre is expected to be finished by June,” he said.

The 33 double-storey townhouses will be sold by RPM real estate.

Mr Masalkovski said there was no word on the status of the proposed Catholic school, but he believed a decision would be made soon.

The area is expected to grow rapidly over the next five years, with at least 700 properties still to be sold in the neighbouring Stonehill estate.

** In November 2013 Moorabool Council approved a planning permit for the same site, giving the go-ahead for a $6.9 million retail development.