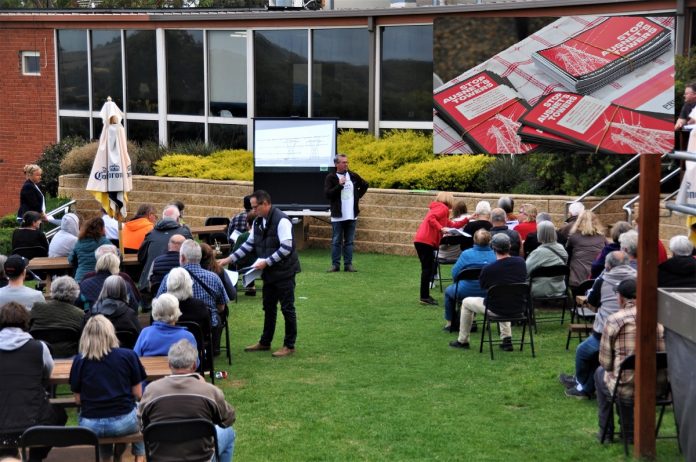 A meeting of 120 concerned locals has been told that the value of their homes could “conservatively” be cut in half if high-voltage transmission lines up to 80m high were erected across Darley.

“There’ll be a conservative estimated drop in value of 30 to 50 per cent,” Moorabool and Central Highlands Power Alliance President Emma Muir told the gathering at Bacchus Marsh Golf Club.

“It’s hard to imagine anyone wanting to pay current market value for a compromised view.”

The group is calling for the 500kV Sydenham-to-Ballarat section of the proposed 190km line to go underground.

The meeting was updated on the Stop Ausnets Towers campaign and while Ausnet Services has not yet released its narrowed-down ‘area of interest’, Ms Muir said one of Melton’s main sports venues – Macpherson Park – was under investigation.

Ausnet Services said the feedback from consultations and meetings in 2020 \was currently being considered as they identified potential corridors within the area of interest.

“We will be narrowing down the Area of Interest to corridors for further investigation,” spokesperson Helina Lilley said.

“We will announce further details on this in the coming weeks.”

Meanwhile, Ms Muir told the meeting the project to develop a line from Sydenham to Bulgana was now about six months behind schedule.

She said the Environmental Effects Statement submission process needed for the line to go ahead would come out in June 2022, it would be followed by public submissions in late 2022 – with construction pencilled in for early 2023.

“This has affected the mental health of a lot of people,” she said during question-and-answer time.

“I know (for our family at Myrniong) this has changed our lives forever – and we’re not going to see the end of this for two years.

“That is something the government doesn’t really care about so far.

“Ausnet actually has an on-call counselling service that you can use.

“One of our members used it – and got rejected.

“That issue is something that needs to be re-looked at.”

“There are certainly thousands of people affected by this project and there are still people who don’t even know about it.

“That’s why we’re doing this, because we just feel that after COVID we just haven’t had an opportunity to get out and have a big rally and say ‘Here we are – this is what’s happening’”

The meeting was told the tower easements would be up to 85m wide on the “super-critical” higher-voltage section of the line between Melbourne and Ballarat.

Alliance Campaign Lead Nathan Lidgett said that in the past, the State government had ‘right of way’ with line placement – and the easiest solution for agencies like the State Electricity Commission had been to put up large pylons.

“It hasn’t extended into how to transmit that energy to the cities or the big users.”

Hi all, Hope everyone is doing well in these crazy times! If you've got a minute please jump over to the…

The meeting was also told the Toolern Vale and Wattle Flat Landcare groups were among organisations working under the Alliance umbrella, while others were tackling the same issue independently.

What a great turnout for last nights information session in Darley! Great to see so many impassioned locals coming…