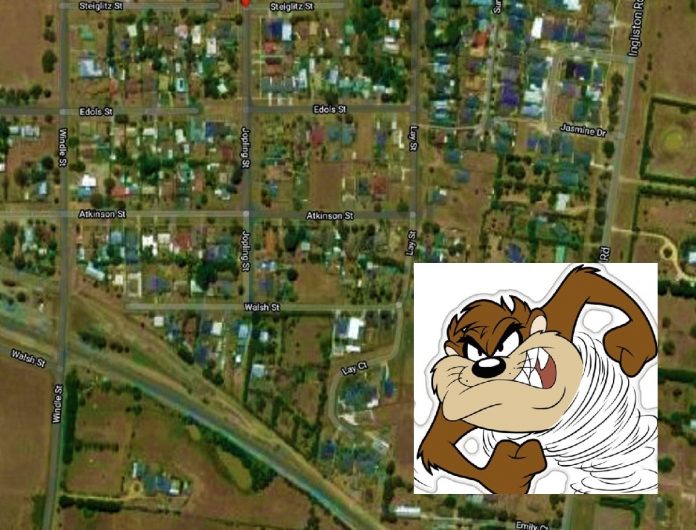 Police have described the effect of a Ballan/Gordon/Mt Egerton crime-spree as “a bit like the Tasmanian Devil”.

No offenders – or Looney Tunes characters – have been arrested yet, after a dramatic Tuesday across central Moorabool involving multiple thefts, burglaries, pursuits and the police airwing.

Moorabool CIU have also confirmed that the small green Lancer seen speeding through central Ballan around 9am that morning was not the same green Lancer involved in a Bourke Street Mall incident the week before.

That car was recovered a short time after the rampage – and 20-year-old Ballarat man Bryce O’Donnell has appeared in Melbourne Magistrates Court on charges including reckless conduct endangering life.

When it came to the central Moorabool crimewave, Detective Josh Coy said investigators believed there was one main offender – but they were also looking into the role of a second man.

Police have confirmed the offenders drove at least two stolen cars on the day – a bottle-green two-door Lancer and a late model Range Rover taken from Lay St, Ballan.

Witnesses saw the Lancer speeding down Cowie and Inglis streets, as well as Old Melbourne and Geelong-Ballan roads with a police car in pursuit.

Det Coy said neither car had been recovered.

He urged locals to remember to lock their homes and cars – even if they were in a rural area – and to keep their homes secure.

Anyone with information about the February 2 crimewave should call Crimestoppers on 1800 333 000.

Anyone who witnesses time-sensitive suspicious behaviour should call 000.

And here’s the real thing, at the Ballarat Wildlife Park…