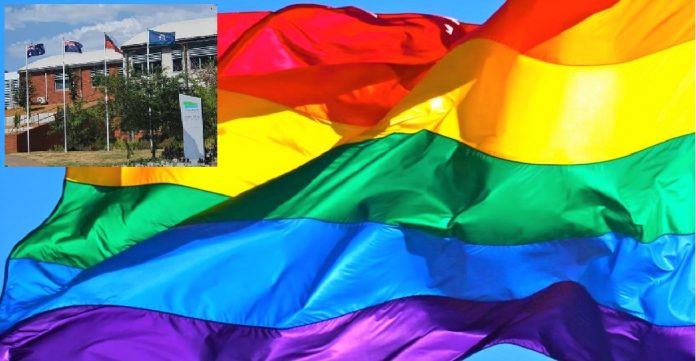 Moorabool Council staff will prepare a report into the cost and logistics of flying the rainbow flag on significant days for the LGBTIQA+ community.

It is unclear when the decision will return to Council for any final nod – and if it will happen before IDAHOBIT Day on May 17.

Rather than flying the flag on special days immediately, Cr Tonia Dudzik put forward an amended motion – to include a report – which was backed by four of the seven councillors including David Edwards, Moira Berry and Rod Ward.

The former AFL Goldfields Chief Executive said it was vital to actively welcome any group in the community that might have felt excluded in the past:

“We represent all constituents but in my previous role … football was at the forefront of dealing with issues of racism and we had several grounds where indigenous footballers felt they were unwelcome,” Cr Ward said.

“Now that wasn’t necessarily there to change other people’s views, but it was to make sure that indigenous footballers and netballers felt welcomed at those grounds.

“I don’t see flying the (rainbow) flag as something that’s going to be divisive.

“I think it would send the message that we are an all-inclusive community.”

Cr Ally Munari voted against the report and raised questions about the cost:

“This community was very much supported a few years ago with gay marriage,” she said.

“I already believe this shire gives a lot of support to this group.”

Cr Paul Tatchell told the meeting that the flying of rainbow flags was splitting communities.

“You go anywhere in the world … and one of the most important things you see on a government building is the flag – and it represents all of the people,” Cr Tatchell said.

“I have never in my life seen a flag that changes someone’s view.

“So when the rainbow flag issue was first presented (to councils) it was purely to lobby for gay marriage. That was its intent…

“If you look at those councils today – Hepburn, Surf Coast – (rainbow flags) have been a constant hassle from the day they put them up.

“And there was also the issue of: ‘Is it Council business to have influence over moral guidance, moral policy or any of these things that are irrelevant to what we do?’

“People pay us to represent them in our ward on Council issues.

“This is a political debate that’s turned into a flag.

Cr Dudzik said she believed the spirit of her motion was about accepting people’s differences.

“I actually think it’s very sad that councillors would have such strong objections to (flying the flag),” Cr Dudzik said.

“I really think you should open your minds.

“Flying a flag – what harm can it do? It’s just about saying that ‘you’re welcome’ – and that’s what we want.”

The debate took up much of Wednesday night’s meeting and was split into two parts.

Cr Dudzik also wanted to see council officers guarantee the inclusion of the health and wellbeing priorities of the LGBTIQA+ community in the next Moorabool Municipal Health and Wellbeing Plan.

This was lost, as was an amended motion removing the word ‘guarantee’.

The health plan is reviewed every four years – and Council officers said the renewal process would start this month.

Chief Executive Derek Madden said Council had been planning to include the priorities of the LGBTIQA+ community in the health plan anyway – and that Cr Dudzik’s motion was highlighting this.

“It’s news to me that we need a second policy,” he told the meeting.

“I have no problem with creating a policy that is inclusive of everybody. I think that’s incredibly important.

“I just think this is incredibly premature…

“If you look at this issue in context, this would suggest that they’re being excluded now.

“Equality is: ‘Hey, this is just my friend’ – regardless of what they do.”

Cr Edwards said he had concerns about conflicting health priorities between groups and cited the needs of senior citizens.

“While I believe we should consult with all groups, do we prioritise one group?” he said.

“And does this come at the cost of other groups?”

Cr Dudzik told the meeting “not a lot of work” had been done in the past for the gender-diverse community in Moorabool.

“I know there are residents who will benefit,” she said.

“It will ensure their needs are catered for.”

The Darley meeting was live-streamed but closed to the public due to COVID-safe restrictions.