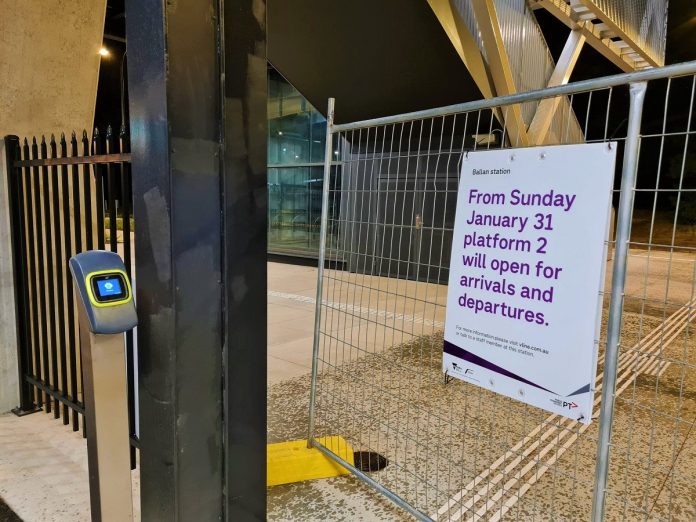 The Ballarat line will now have a 4.23am weekday service to Melbourne – allowing early-morning workers in Ballarat and Ballan to get to their destinations almost an hour earlier.

The earlier start is also expected to benefit people on their way to Melbourne Airport – with a Southern Cross arrival time of 5.48am and the service stopping at every station between Ballarat and the centre of Melbourne.

The new timetable takes effect today (Sunday 1 February), but the State Opposition has slammed the loss of some express trains across the network.

On the Ballarat line, changes to express services include the shifting of the 6.09am Wendouree service to 6.14 and the addition of two extra stops at Rockbank (7.11) and Deer Park  (7.19), meaning the train will now arrive at Southern Cross 15 minutes later (7.44am).

A reminder that V/Line’s new train and coach timetables are changing from this Sunday 31 January. Check before you travel and view the new timetables here: https://bit.ly/38tLFqh

The same stations have also been added to the 6.37am from Wendouree, which will now leave three minutes earlier and get in two minutes later (8.03am).

Ballan can expect a service roughly every 20-minutes during the morning peak – and in Bacchus Marsh it will be even more frequent.

There is also good news for commuters heading home from Ballarat in the evenings – with the dash for the 5.15pm coach now a thing of the past.

It has been replaced with a 5.33pm Ballarat train that stops at all stations and arrives in Melbourne at 7.07pm.

Timetable Change – Reminder Timetable changes are coming to Victoria’s train network from this Sunday – with 450 new services each week, helping Victorians get back to work safely and quickly. Our new timetable includes 150 new services each week over longer peak periods – 70 metropolitan services and 80 regional services, to encourage passengers to stagger their travel and giving people more space on trains and platforms to maintain physical distance. The recently completed Ballarat Line Upgrade will give Ballarat line passengers trains every 20 minutes during peak travel periods and every 40 minutes at other times. Across the state, we’re gradually re-coordinating almost 360 bus and regional coach services from January through to April to better connect with trains. A 30% off-peak fare discount for metropolitan passengers will also commence from Sunday, and will be in place for the next three months. Passengers touching on and off between 9.30am and 4pm or after 7pm on weekdays will automatically receive the discount. Timetables and more information are available at – ptv.vic.gov.au and vline.com.au

** Travelling in the other direction from Melbourne, the first train of the day all the way to Wendouree will now depart 10-minutes later at 5.13am – arriving at Melton at 5.50, Bacchus Marsh 5.58, Ballan 6.16 and Ballarat 6.42am.

But the age-old problem of commuting west from Melton remains a problem during the evening peak.

A worker knocking off at Melton at 5pm will be forced to catch two trains and reach Ballan by 5.54 (a trip that would normally take 27-minutes) and Ballarat at 6.14pm.

“Commutes to and from Ballarat will also take longer than ever with the removal of key express services on the line,” he said.

“Daniel Andrews has seemingly wasted billions of dollars of taxpayers’ money on transport infrastructure with countless major disruptions to commuters’ travel only to result in train services that are now slower and less direct than ever before for many commuters.

** Meanwhile, the Transport Matters Party has called for school buses to be used to improve public transport in country Victoria.

“When these buses are not driving 65,000 or so students to school, they often sit idle,” he said.

“The School Bus Program is a state-funded resource that is largely under-utilised.

“The irony is that these spare assets exist alongside severe transport disadvantage.

“With a lack of alternative transport options, there is a dependency on cars to get around. “This disadvantages youth who are dependent on lifts, low-income earners that struggle with the financial burden of running a car and senior citizens who require flexible transport arrangements.

The party said if adopted, the plan would increase the number of Victorian bus routes from 323 to 1600.

RELATED STORY: New services for Ballarat line, but what about Ballan?