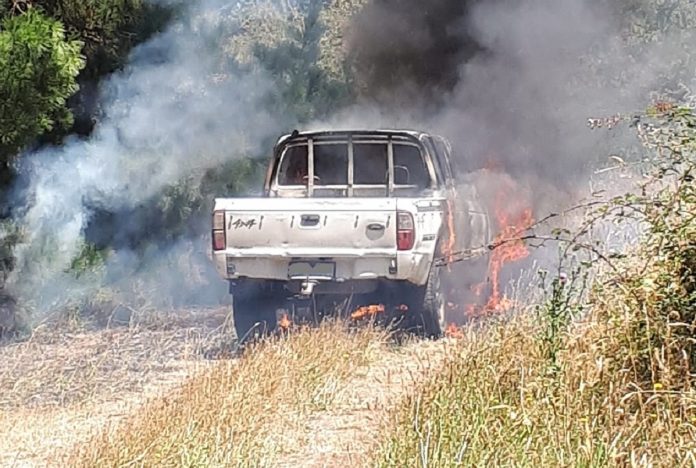 A stolen ute has been found on fire in what locals say is a neglected bush area in Millbrook they have been trying to get cleaned up for more than 15 years.

The Ford was discovered well alight around 12pm Wednesday on a 4-wheel-drive track in a Crown Land area known as the Black Creek dip.

The site is not visible from the nearby Yendon-Egerton Rd and is close to plantations and forested areas around Lal Lal Reservoir.

Local woman Charmayne said flames singed trees and grass, but it was fortunate the wind was blowing away from nearby thick bush.

The odd-shaped parcel of land is believed to follow the path of a dirt road that ran over Black Creek until the 1980s.

The road is now a four-wheel-drive track but its concrete bridge is still standing.

“I’ve been asking Moorabool Council for 15 years to do something, but it’s a bit unclear who’s responsible for the land,” Charmayne said.

“Maybe it should be sold and fenced off.

“They could also block off the land in a way that only allows access to landholders, emergency services and Central Highlands Water.

“I’ve rung the Council a few times about the weeds, shooters driving into the area at night, people doing burnouts nearby as well as unregistered trailbike users.

“There are also signs along the road indicating there is significant roadside vegetation, but 4×4 drivers are just going off the track and running over it. They tear it up – and a few have become bogged as well.

“This time round I’m going to put it in writing.

“They’ve told me it’ll be mowed in the next few weeks.”

She said her young child noticed the fire on their way to an appointment.

“I had my three kids in the car and we heard an explosion – I believe it was one of the tyres,” she said.

“I was too scared to leave for Ballarat in case emergency services didn’t get there in time.

“I didn’t want that fire to get into the bush and spread to our home.”

Wednesday’s top temperature was a mild 21 deg C, but meaningful rain had not fallen on the region for more than three weeks.

“Crime seems to be getting worse in the area. There have been so many incidents involving stolen cars lately,” she said.

“People really need to be careful.”