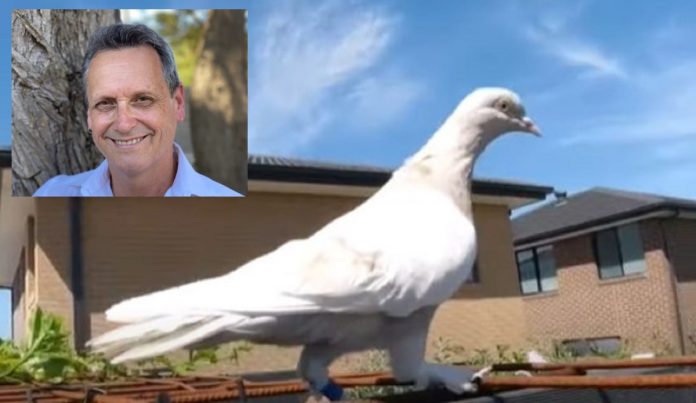 A Western Victorian Upper House MP is calling for the life of a pigeon to be saved, after it made an epic two-month journey from the United States to Melbourne’s outer east.

No one knows how the racing pigeon – dubbed ‘Joe Biden’ – made the 15,300km trip, but the Federal Agriculture Department believes the tagged bird is a biosecurity risk and must be put down.

Animal Justice MP Andy Meddick (inset) said Joe should instead be quarantined – and if all goes well, allowed to live in Australia.

“I’m calling on the Federal Government to offer a pigeon pardon for Joe,” the Geelong-based MP said.

“Should the Federal Government allow Joe to live, I am happy to seek assurances that he is not a flight risk.

“My message to the Federal Government is this: take Joe off death row.

“Surely the Federal Government has larger issues to deal with right now than death sentences for pigeons?”

TAKE ACTION: Joe the pigeon is set to be killed by the Federal Government after being deemed a ‘biosecurity risk’. Joe…

After vanishing from a race in Oregon on October 29, Joe turned up in a backyard at Officer in Melbourne’s outer east on December 26 – where a local man began feeding him crackers.

The man told the Herald-Sun the bird was weak and allowed him to pick it up. Later he noticed it had a leg tag.

The number did not match any records in Australia, but a Google search revealed it was registered to an owner in Montgomery, Alabama.

Federal officials are asking the Officer resident to catch the pigeon, but the Health Minister has stepped in, calling for compassion.

Mr Meddick is now asking supporters to sign a petition.