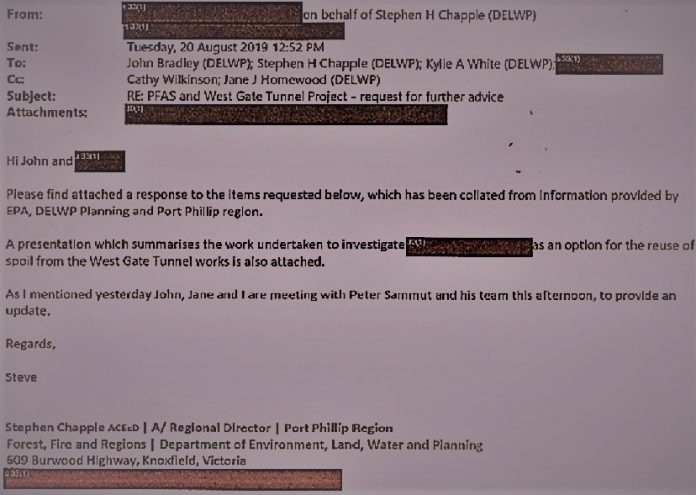 A newly-released email reveals pressure on the Environment Protection Authority to approve PFAS-contaminated soil dumping sites – and comes as the head of the EPA has been quietly replaced.

The interim CEO is Tim Eaton. His views on PFAS are known, after he told ABC Statewide Drive on September 2 that “low levels” of PFAS would come from tunnel soil and that measures were in place to make sure the job was “low risk”.

When Nicole Chvastek spoke with both the Tim Eaton from the EPA and Kat Barlow on ABC yesterday, we hoped to hear some clearer answers from the EPA on why they have approved MBC to take the tunnel boring soil… Instead, we were given empty promises, and redacted documents. We expected better from the EPA. If our own Environment Protection Authority Victoria won’t protect our health and environment, who will?

Posted by Bacchus Marsh says NO to Toxic Waste on Thursday, September 3, 2020

Shadow Environment Minister Bridget Vallance said she believed the email – revealed via Freedom of Information – showed pressure was applied to the “supposedly independent regulator to force through approvals on the dumping of soil from the West Gate Tunnel”.

“This is extraordinary evidence of scandalous attempts by several senior Labor Ministers to bully and pressure the EPA into cutting corners and expediting the process,” she said.

“Interference into the work of an independent agency is crossing the line into outright political manipulation.”

The Opposition’s David Davis has spent a year pushing for the full release of West Gate Tunnel documents, including the 19 August 2019 email from a senior staffmember of Lily D’Ambrosio:

“Secretary, DPC to lead discussions on a resolution/pathway forward.

‘Cathy’ refers to the EPA CEO and Chris Eccles was the state’s most senior public servant until he resigned in October 2020.

Ms Vallance said the EPA was meant to play a clear independent statutory role to protect the safety of our environment.

“Its role is not to take directions from Labor Ministers,” she said.

“The EPA and Andrews Labor Government have fought the release of this FOI every step of the way and it’s clear why; they have a lot to hide.

“VCAT will shortly hear the (David Davis) case and rule on the massive redactions and the release of the dozens of documents Labor refuses to make public.

“Victoria under Labor is a secret state where information is suppressed and independent agencies are interfered with by Ministers and their agents.

“Yet these secret documents prove the Andrews Labor Government will stop at nothing to get its way and the EPA is in complete turmoil.

“The community cannot trust the Andrews Labor Government or the EPA to keep Victoria’s environment safe.

“It’s now clear the Andrews Labor Government cares more about looking after big foreign-owned corporates on Labor’s botched tunnel projects, rather than the communities which are fighting to stop toxic soil being dumped next to homes and a school.”

The boundaries between Bacchus Marsh Grammar – one of Victoria’s largest schools – and proponent Maddingley Brown Coal – are 220m apart at the closest point.

“The new Chief Executive needs to come out strongly and make clear that the Authority will be true to its established principles, and not simply be lackeys for Government Ministers seeking to cut corners and override legitimate opposition,” she said.

“It’s of great concern that the acting CEO of the EPA seems already to have made his mind up on the PFAS issue.

“He repeats the mantra that dumping low-levels of the substance is ok, despite the bioaccumulation which would result and regardless of the uncertainties over its long-term effects, both of which the EPA acknowledge in its general PFAS guidance.”

“What is needed here is a fresh pair of eyes.

“For the sake of the people of Bacchus Marsh, the EPA needs to take the opportunity now to recruit a new Chief Executive who isn’t personally compromised by previous decisions on this matter, and who has the independence and political neutrality to stand up to the State Government’s desire to ram through this potentially dangerous project.”

“The EPA needs to act quickly to restore public trust.

“The damning Ernst Young report of May 2020 highlighted concerns about their ability to police companies which threaten public health and the environment, but my greater worry is their apparent lack of independence.

“The Authority allowed Government Ministers to water down environmental legislation on tunnel-bored spoil, despite its role as an independent, arms-length arbiter on such matters.”

** PFAS are per- and polyfluoroalkyl substances. They are a group of man-made chemicals that have been used since the 1940s.

They do not break down easily in the body or in the environment and can accumulate over time. PFAS can be found in stain- and water-repellent fabrics, Teflon and fire-fighting foams.

The West Gate Tunnel will be drilled under the site of the 1991 Coode Island chemical storage fire, where 200 tonnes of firefighting foam concentrate was used.

The project is now at least a year behind schedule and the cost has blown out by $3 billion.

RELATED STORY: EPA to quash its own toxic soil decision