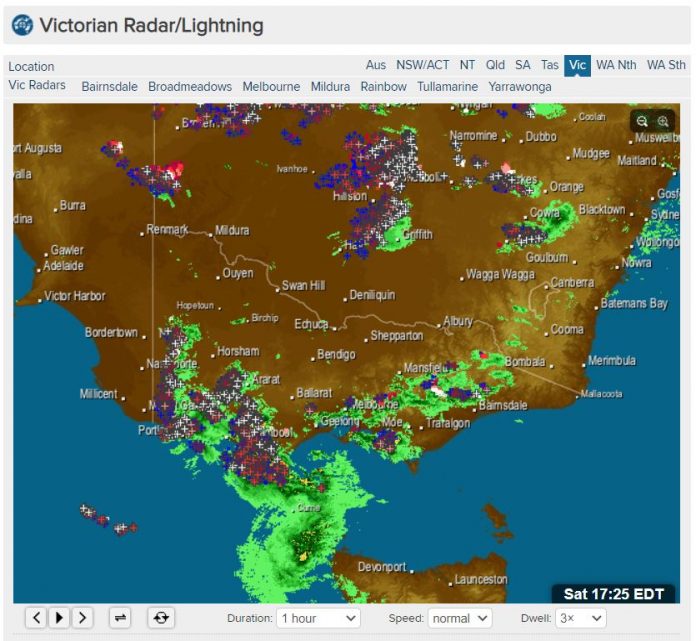 Weather Situation
A high to the south is directing a moist easterly flow over Victoria while a trough over the west of the state is currently deepening and developing multiple low centres. This trough is expected to continue developing over western Victoria this morning then move east during this afternoon and evening.

HEAVY RAINFALL and LARGE HAILSTONES for the following areas:
Central, East Gippsland, Mallee, South West, Northern Country, North Central, North East, West and South Gippsland and Wimmera
Very dangerous thunderstorms are likely to produce intense rainfall that may lead to dangerous and life-threatening flash flooding over the next several hours in parts of the South West and Wimmera districts. Locations which may be affected include Edenhope, Hamilton and Casterton.

Severe thunderstorms are likely to produce large hailstones and heavy rainfall that may lead to flash flooding over the next several hours in the Central, Mallee, South West, Wimmera and parts of the East Gippsland, Northern Country, North Central, North East and West and South Gippsland districts. Locations which may be affected include Mildura, Horsham, Warrnambool, Bendigo, Maryborough, Ballarat, Geelong and Melbourne.

Mildura has recorded 12mm of rain within 30 minutes to midday, and large hail (diameter near 2cm) was observed near Mildura this morning.
Warrnambool has received 48mm since 9am today

The pollen count in Creswick and Melbourne today is considered ‘Moderate’