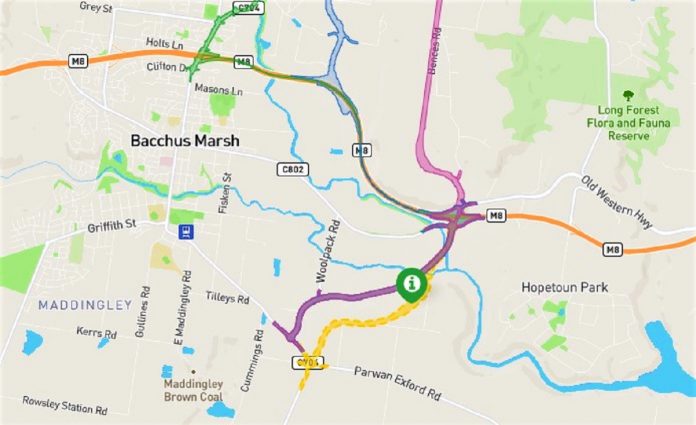 “We’re extending our online survey for the Bacchus Marsh Eastern Link planning study until 5pm on Thursday December 24, to allow as many people as possible to provide feedback on the shortlisted routes,” RRV Grampians Regional Director Michael Bailey said.

“We’ve received feedback from a broad spectrum of the community after sending more than 4900 direct emails and 235 letters to landowners, receiving more than 100 online survey responses, and holding a mixture of one-on-one and community meetings.”

RRV said the community consultation was aimed at building an understanding of the way these routes would be used and the impact of suggested alignments.

“(This will) inform a decision on a final preferred alignment for a future eastern link road.”

EARLIER: Time is running out to have your say on a preferred east link road to get truck traffic out of the centre of Bacchus Marsh.

A survey was released as a sidebar to a series of maps about two weeks ago, but locals have until tonight (Friday December 18) to get it in.

“We have been told that 500 letters have been sent out and 70 properties are potentially affected by the proposed road options,” she said.

“But I took part in a session where there were 11 people – and we were told only five were actual residents.

“On top of that, the area – especially Merrimu – has experienced terrible internet drop-out problems.

“Doing everything just before Christmas is appalling. I also believe it was poorly advertised.

“I would encourage people to complete the survey as soon as they can.

“It really doesn’t take too long.”

Concerned readers contacted our office, saying they did not know how to answer the survey because they valued local horticulture but were not aware of how farmers in and around the Bacchus Marsh Avenue of Honour would be affected.

December is the peak harvest time for cherries, strawberries and other berries. The apple season is also due to start shortly.

I attended the online consultation by Regional Roads Victoria on the 3 eastern interchange options being considered. It was at 10 am on a Saturday morning and there were only 11 participants in the meeting. They said at the start there were only 5 people who had joined them so the rest must have been from RRV. I dropped out of the “consultation“ 4 times and told them that the internet connection is poor in the Merrimu area and it may not be best way to consult. 70 homes have been sent letters saying they could be affected by the eastern interchange. RRV said that the options did not impact 100 year old river red gums or the aboriginal scar tree. They also said that the Avenue of Honour would not be impacted by these options. There are 2 more online consultations planned you may wish to attend to get answers to your questions.

People wanting to view the options on an interactive map and comment on their preferred route can click here.

** Option 2 wipes out the most agricultural land. It would see the creation of a new road on the upper western edge of the escarpment and head west around Ta Pinu Shrine. A new interchange would be created at the Western Freeway. The Avenue of HOnour interchange would be upgraded and a new connecting road would head over agricultural land near the junction of the Werribee and Lerderderg rivers and connect at Woolpack Rd.

** Option 3 diverts the most traffic through suburbia. It heads from Coimadai via Gisborne Rd, the Western Fwy, an upgraded diamond interchange at the Avenue of Honour and would see the creation of a new road over farmland that connects with Woolpack Rd.

** The Alternative Southern Route takes traffic away from Woolpack Rd and the Avenue. It can be used on any of the three options.  It would pass through farmland close to the junction of the Lerderderg and Werribee rivers and would end at the upgraded intersection of Geelong-Bacchus Marsh and Parwan-Exford roads.

RELATED STORY:  RRV releases options to get trucks out of Bacchus Marsh