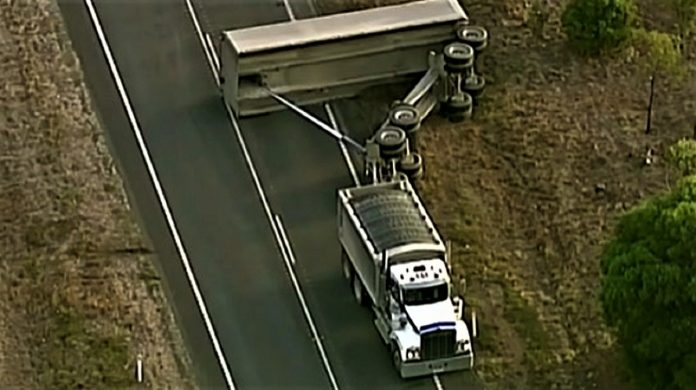 Witnesses to a fatal Parwan truck accident have told the Ballarat Magistrates Court they saw a trailer roll, but did not realise there had been a collision with a second truck.

Darley driver Warren Blake 51 will stand trial in the County Court in February on charges including dangerous driving causing the death of fellow truckie Andrew Rodger.

The rollover and subsequent collision happened half an hour before dawn on 25 March 2019 on the Geelong-Bacchus Marsh Road.

Mr Rodger, 55, died at the scene after being ejected from his crushed cabin.

His grey Bacchus Marsh-bound Kenworth tipper-trailer came to a standstill 224m away from the collision site, after missing a home by metres and careering through fencing, a stockyard and a tin shed.

The other truck – a white Kenworth – was travelling in the Geelong-bound lane with a large trailer-load of gravel.

The court heard it was travelling at 96km/h, but the speed of the deceased’s truck could not be determined.

Mr Blake has pleaded not guilty to the charges and has been granted bail.

“Viewing the dashcam footage , this is a narrow two-lane country road that was quite a busy road, even at that time of the morning,” Magistrate Kate Hawkins said.

“It appears from the expert evidence from the court today that possibly inattention led to your vehicle travelling momentarily on the wrong side of the road.”

“I’d seen the headlights of the north-bound (Rodger’s) truck, but I didn’t know there’d been a collision,” he told the court.

“I saw the trailer in front of me roll over. I didn’t see the collision itself.

“I just saw gravel and rods flying off the truck – and I later found out the rods were for holding down the tarp.

“The part I remember most was talking to triple-zero, opening my phone and looking at Google Maps to try and tell them my location.

“I did a quick look behind me, but couldn’t see anything.

“I don’t think the driver even knew there had been a collision at that point.”

Mr Shaw said another person at the scene began asking about “which truck” and “if anyone had checked the other truck” – and that is when he became aware of a collision.

He said he saw the lights of mobile phones in the distance – and jogged with a second person towards the second truck.

Mr Shaw said he then saw Mr Rodger’s body at the front of the shed.

He told the court one man was trying to give CPR and another was talking to emergency services on the phone.

Mr Shaw said he then directed paramedics to the farm and helped carry medical kits.

Melbourne-based police forensics expert Detective Acting Sergeant Melanie Macfarlane said there was no evidence on the roadway that Rodger took evasive action and the deceased driver’s truck travelled 224m in a straight line before coming to a rest.

Det Act Sgt Macfarlane said the trailer rotated, entered the opposite lane, tipped and was dragged 245m – and this was a factor in the collision.

The impact also tore off the tailgate.

Det Act Sgt Macfarlane also told the court she doubted that load-shifting was to blame.

“It’s very unlikely heavy gravel like that would shift,” she said.

“It’s not a flexible substance, like water or milk or stock animals. Gravel doesn’t tend to move.”

She also said there was evidence Blake had tried to correct his driving.

Witness and qualified vehicle tester Senior Constable Brett Gardner told the court Blake’s truck and trailer were roadworthy, but there were issues with the brakes.

“The truck itself was driveable and in fairly good condition,” he said.

“(But) it didn’t pass the roller-brake test on three of its axels. There was also some misalignment of the (brake) shoes. They were unevenly worn.”

“This means that when the brakes are applied, they’re not coming on evenly. One side would come on before the other.

“Even though the tipper itself met the standards, as a combination with the trailer, the vehicle as a whole failed total brake performance.”

He told the court that if the trailer was loaded to capacity – and had poor brakes – the force of the weight would push the front section along.

“It could overheat the brakes, cause stability issues or the vehicle could wander in its lane.

“If there’s an inconsistency when the brakes are applied, it could cause one side to lock on – with the potential for a rollover.

“This vehicle would have been in an unroadworthy condition.”

Later, Mr Blake’s lawyer Andrew Bayliss asked the Magistrate to drop the charge of dangerous driving causing death because it could not be proven beyond reasonable doubt.

“We have heard that load-shifting and brakes may have led to the accident,” he said.

“Mr Blake is an experienced and professional driver and there were no drugs or alcohol present.”

“The accused truck goes round a bend, he corrects it, there’s a steering input and the trailer rolls,” she said.

“Even at the low end of the scale, the inattention is sufficient.”

Meanwhile Forensic Physician Dr Sanjeev Gaya told the court there were several medications in the deceased driver’s system including a type of amphetamine used to treat his ADHD.

He said Mr Rodger was taking more than his prescribed dose, although it was three-times lower than the level generally found in impaired drivers.

“The suggestion is that there is a likelihood the driver was taking a dose higher than 25 milligrams a day,” Dr Sanjeev told the court.

“I can’t say he was abusing the drug or taking it at recreational level.”

He said amphetamines were used as a stimulant medication, but after time, they depleted the energy of the patient “which may manifest in feeling tired or falling asleep”.

He said Mr Rodger also had traces of codeine and paracetamol in his body, but not at levels that suggested recreational use of opiates.

** Mr Rodger’s wife Meshel was present during the online Committal hearing. The 55-year-old was a father of three and grandfather of five.