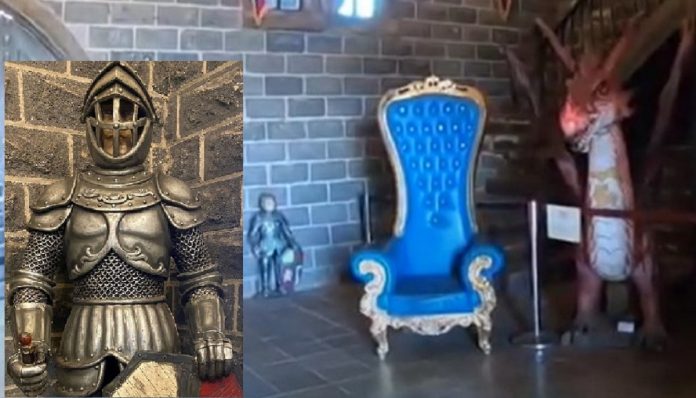 It’s been revealed two thieves caught on CCTV at Kryal Castle paid for a can of drink from a vending machine before taking off with a knight.

The footage – from 3am Sunday morning – shows one of the men guzzling a Coke before stealing the 1m high fibreglass-and-resin statue from the foyer.

General Manager Mel Dimond said the small knight had a life-sized ‘twin’ – and both had been a feature at the front entrance for many years (pictured above).

“They would have been hand-made especially for Kryal Castle. They’re one-offs,” she said.

“We have plenty of CCTV of the incident – and the thieves arrived in a very distinctive car.

“Even though it’s a medieval-themed castle, we have tons of 21st century security equipment.

“It shouldn’t take long to track down whoever took the knight.”

She asked that the offenders take the knight to police – or simply leave the little guy at the drawbridge at the front.

“His friends really miss him – he’s the little fella who greets everyone when they come in. Everyone who enters the castle sees him.”

And the value of the missing knight?

** Meanwhile, the Castle will be open every day over Summer, starting Boxing Day from 2-8pm.

“It’s better for the knights in their heavy metal armour  – and people can sit back and enjoy a wood-fired pizza while they watch the jousting at 7pm each night,” she said.

“The archery is back, as well as the axe-throwing and knight-school.”

Kryal Castle will also offer an ‘Art Bar’ for the first time on Friday December 18.

“People can get their friends together in the beautiful abbey and our artist will teach them how to paint.

“If anyone hasn’t booked their Christmas party yet, this is a chance for a small group to catch up over a fun and unique activity with drinks and nibblies.”

Main image: The missing mini-knight with its life-sized twin (inset).

Why are passenger trains on the Ballarat-Geelong line?