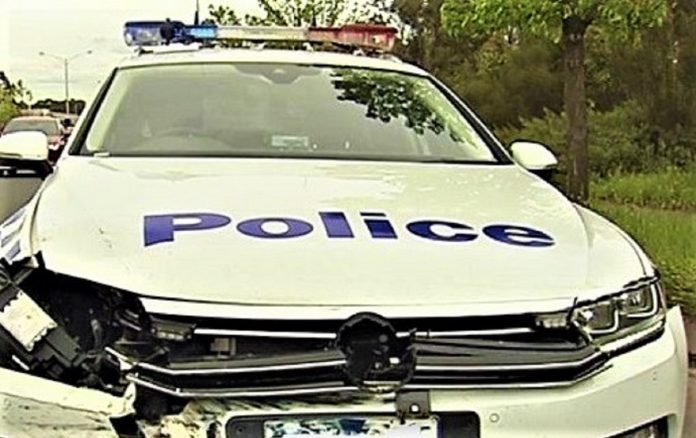 A 20-year-old Melton man has avoided jail after ramming a police car head-on in Harkness.

Melbourne County Court has heard Matthew Shannon was in a dead-end street known as The Crest near Navan Park when he mounted the footpath, knocked over a letterbox and accelerated into a Brimbank Highway Patrol vehicle with two officers inside.

Judge Howard Mason said the impact caused $10,137 worth of damage to the vehicle.

He sentenced Shannon to a three-year community corrections order, 200 hours of unpaid community work, fined him $1500 and ordered that he be banned from getting a licence for two years.

The court was told the drama began at 12.40pm on 23 March 2019, when the police car on Coburns Rd detected a silver 2002 Fairmont sedan whose plates were registered to a grey Ford Territory.

Judge Mason said a pursuit began on between West Melton Drive and Centenary Avenue, reaching 91km/h in a 60 zone.

The car later turned into Princeton Avenue and then Valley View Grove, with police clocking the Ford at 104km/h in a 50 zone.

The court was told that as police turned into The Crest, they saw car doing a U-turn and heading towards them.

It hit the driver’s side of the police car, forcing it backwards.

Judge Mason said both police got out and saw Shannon try to reverse before placing him under arrest.

“During the interview at the Melton station you told police you were just driving home, driving your housemate’s car and were taking a risk,” Judge Mason said.

“You didn’t have a licence yet, but wanted to get one (and you were) doing him a favour.

“You looked behind and saw the Highway Patrol car was – to quote you –‘Coming up my arse’….

“You said: ‘I went on the footpath to turn around cause I wanted to run at first, but then, like, they were there. How could I have run in the first place?  So I just turned around – and ‘boom!’ – straight into them!’”

Judge Mason said Shannon had suffered a disrupted early life with his mother leaving home when he was a year old to escape his father’s drug addiction, violence and controlling behaviour.

He said Shannon’s mother struggled with drugs herself and Shannon spent some time in the guardianship of his father.

“You recalled that as a child, you believed rules did not apply to you and you could do whatever you wanted.”

The court was told Shannon began smoking cannabis at age 10 and ice from 13, building up to a three-times-a-day habit.

“You claim to have been substance-free since the offending as you were not previously aware of how your drug use was impacting others,” Judge Mason said.

“You struggled academically and behaviourally – and in your final year at primary school you were referred to a specialist by a teacher and were diagnosed as having a mild intellectual disability.”

The court was told he was now getting help through Health and Human Services and funding was likely to become available for him via the NDIS.

The court was told Shannon had a supportive family environment and his mother had now been drug-free for several years.

Judge Mason said Shannon had displayed “good conduct” while on bail for the last 18-months.

“Mr Shannon you’ve got a real chance to build on the work you’ve done to rehabilitate yourself and move away from your addictions and all the trouble that’s likely to get you into.

“(There are) a lot of caring people who you can get some help from. Use that and you’ll manage to keep out of trouble.”