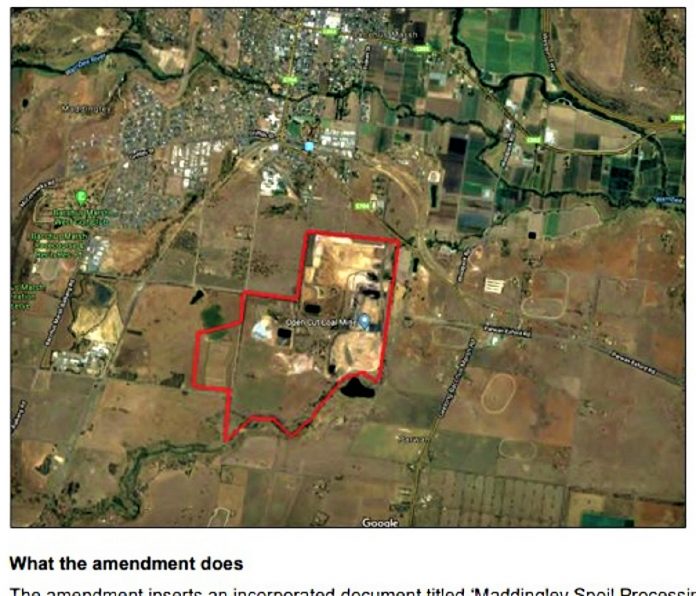 Moorabool Shire Council is angered and disappointed that the State Planning Minister has approved an amendment to the Moorabool Planning Scheme that will allow Maddingley Brown Coal to receive, categorise and store contaminated soil from the West Gate Tunnel Project.

While it is not the “final nod” – the gazetted amendment (main image) is helping to pave the way for the future dumping of PFAS contaminated soil on the southern outskirts of Bacchus Marsh.

Council was notified of the decision today (Monday), meaning the State Government has given the green light to MBC to process the soil, subject to Upper House approval.

“It is then up to Transurban to consider all approved locations and make the final contract decision as to where the soil will go,” he said.

“In light of the Minister’s decision, Council will look at all options for next steps including taking legal action.

“We’re not surprised but we’re extremely disappointed with today’s decision.

“It’s our view that the process for considering the application has been flawed as there has not been adequate consultation for a project of this nature, particularly with impacted Councils and the community.

“The whole way through this, Council was left in the dark and effectively shut out of the planning decision process, as the Minister called the project in to make the decision.

“This means the decision was made without any decent consultation with our community, which is a slap in the face to our Bacchus Marsh residents.”

** PFAS are per- and poly-fluoroalkyl substances – a group man-made chemicals used since the 1940s. They do not break down easily in the environment and can acummulate over time.

PFAS can be found in products such as fire-fighting foams.

The tunnel project is now at least 10-months behind schedule and the cost has blown out by $3 billion.

Breaking News; Today the State Labor Government has Gazette amendments to the Melton Planning Scheme and the Moorabool…

The project was first proposed by Transurban in 2014 under the Napthine Government. The Andrews Government agreed to a modified plan in 2018, when contracts were signed and Transurban tendered the work to John Holland, who later tried to terminate the contract after discovering the soil toxicity was worse than first thought.

While the companies were still trying to work out who will pay the extra costs for removal and storage of the PFAS-contaminated soil in mid-2020, the State Government changed the EPA regulations to make it easier to dispose of.

Hi Quality in Bulla (Hume council area), MBC in Bacchus Marsh (Moorabool) and Cleanaway in Ravenhall (Melton) have all put in tenders to dispose of the soil.