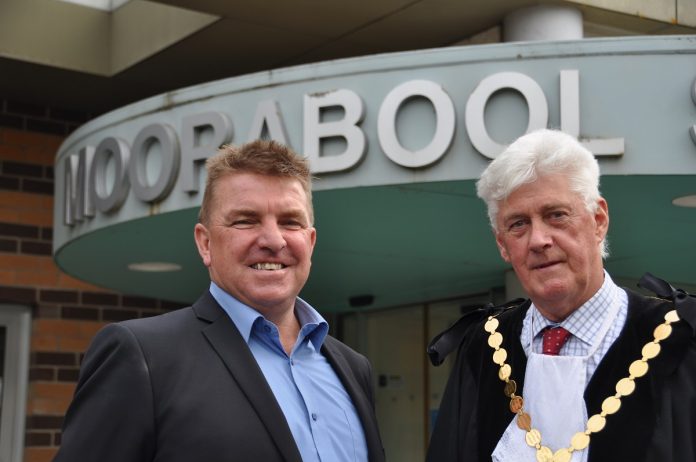 The Millbrook farmer, licenced surveyor and father of six takes the reins from David Edwards – and it will be his third term after 24 years as a West Moorabool councillor.

“Back then we didn’t have these mayoral robes and this chain. That was 2000 and the Council couldn’t afford it back then. The mayor wore a pendant instead,” he said.

Cr Tonia Dudzik put forward Cr Sullivan’s name at the Ballan meeting tonight (Monday) – and it was the only nomination for the top job.

“We have a group of councillors with a wide range of skills,” Cr Sullivan said.

“As a Council we are well-positioned to take this Shire forward.

“The position we find ourselves in today didn’t happen by chance. It was the result of decisions that have been made.”

Wife Therese was there to witness the vote.

“Without the support of spouses and families we would not be able to be councillors,” he said.

“I want to thank Therese and my family.”

Cr Sullivan faced his first election since 1996 this year, when Gordon man Lindsay Watters put his hat in the ring for West Moorabool. The Local Government veteran managed to score more than 75 per cent of the vote.

“Over the last 12 months there’ve been many challenges, including overhead powerlines, toxic soil and COVID19,” he said.

“All of these were enormous challenges and we left no stone unturned. We put in many many hours to go above and beyond for our community.

“It’s been an honour and a privilege to be mayor in one of the most challenging years in the Council’s history.”

The first ordinary meeting of Moorabool Council will be held on Wednesday December 2.