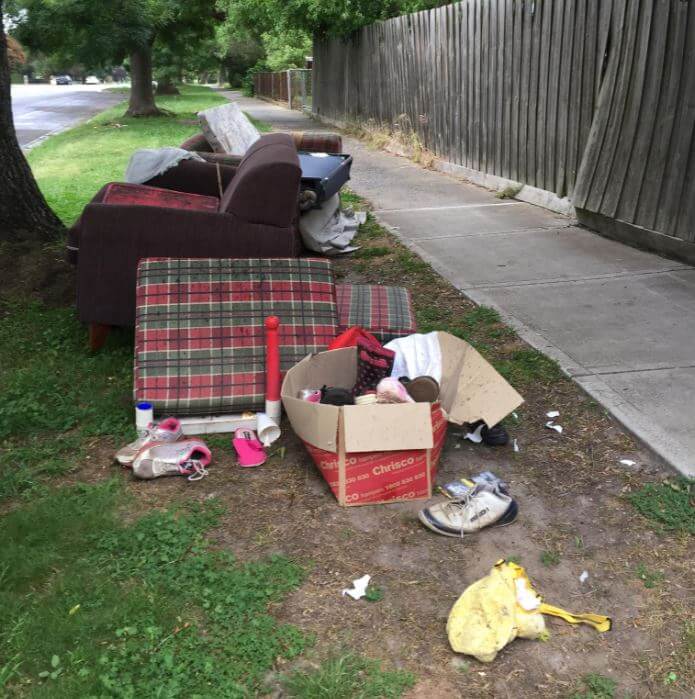 Its been a problem that has plagued Op Shops for years.

This mess (main image) was left on a nature strip outside Steptoe’s op shop in Ballan at the weekend, despite signs stating that it did not want furniture.

Ballan Lioness President Fred Moore said it cost the volunteers $70-$100 a week to take unsaleable goods to the tip.

“We’ve spoken to Moorabool Council about it, but they say the tip-operators are private companies and we have to pay,” she said.

“At the moment we have no room for the sofa and other things left at the weekend. The other thing is, they’re unsaleable.

“Our standards are pretty high in the shop.”

“A lot of the furniture we get has springs that have gone or wooden slats that are broken.

“While we’ve had some nice secondhand sofas come in, all furniture has to be up to a certain standard.

Ms Moore said barriers had been placed over the donation drop-off area during lockdown – and again recently – due to the volume of goods.

“Even while the barriers were up, people still left stuff on the nature strip.

“Legally that is not ours if its left on a nature strip. It becomes a Council responsibility.”

On top of that, minimum fines of $303 can be issued under the Environment Protection Act 1970. The fine increases based on the size and type of dumped litter.

The Lioness President said volunteers were also frustrated at the amount of broken, ruined and unsaleable clothes donated.

“You wouldn’t believe what comes in – things like jeans with the backside cut out or filthy underwear,” Ms Moore said.

“They also give us clothing with holes and paint all over it.

“I’ve seen tracksuit pants where I think there’s been more paint on the pants than on the house they were painting.”

She said while the shop sold bags of rags, some clothing donations did not even make the cut.

But Ms Moore said the club was grateful for the good quality donations that came in:

“We have to suck it up, even though we keep putting signs up.”

** Meanwhile, ‘Mary’ who sent us these photos called for Moorabool to start a hard rubbish collection or issue tip passes to help reduce the burden on op shops.

“Other Shires have access to tip passes or hard rubbish collections,” she said.

“It’s about time Moorabool did too.”

Whether it’s on a nature strip or deep in the bush, illegal rubbish dumping costs the Moorabool $80,000 a year.

People who come across illegal dumping are encouraged to report it by calling council customer service on 03 5366 7100.

Never put yourself in danger or approach a person engaged in illegal dumping. If safe to do so, collect as much information as possible, including:

RELATED STORY: A month of rain in one day keeps SES on their toes