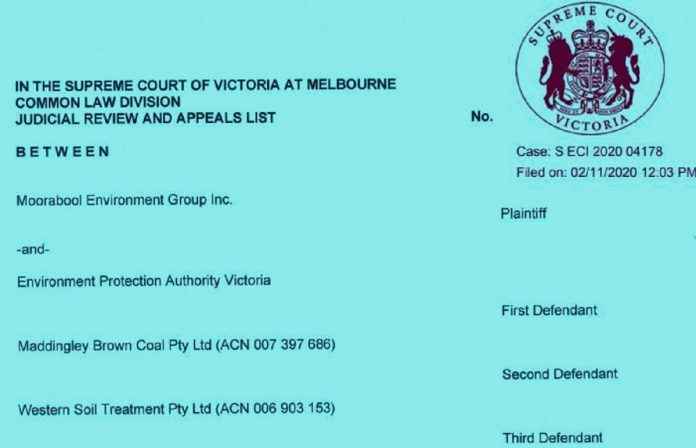 The Moorabool Environment Group has launched legal action over a proposal to dump PFAS-contaminated West Gate Tunnel soil in Bacchus Marsh, saying it will harm a threatened native frog and that a new name registered as the proponent has created confusion over who is responsible for what.

In an affidavit before the Melbourne Supreme Court, MEG president and University of Melbourne academic Dr Jodie Valpied is seeking “relief or remedy” from the Environment Protection Authority as well as Maddingley Brown Coal and Western Soil Treatment – two entities with the same director and same addresses.

MEG said in its legal document it wanted a decision quashed by the EPA to approve a 31 August MBC environmental management plan that paved the way for PFAS-contaminated soil to be dumped and sorted in Bacchus Marsh.

They also called for October 12 amendments to the plan to be quashed.

“The approval decision was an improper exercise of power because the result… is uncertain,” MEG stated.

“The decision is in many respects subject to further information or specifications being provided.

“The reasons for the approval decision… dated 1 September are unclear, ambiguous and unrealistic in terms of audit and enforcement.

“It is (also) not clear which entity – Maddingley Brown Coal or West Soil Treatment – is the proper subject of the approval.

“The environmental management plan was submitted to the EPA under cover of a letter from Mr Donald Calleja, identified as the Chief Executive Officer of Maddingley Brown Coal and Western Soil Treatment.

“The letter stated that the entity responsible for the operation of the facility and on whose behalf the EMP was lodged is Western Soil Treatment.

“The Approval decision is addressed to both entities.

“No requirements specify which entity is required to perform them or which entity will be liable in event of no-compliance.”

The MEG document also stated that under the Tunnel Boring Regulations, the EPA could only approve a plan if it was satisfied that it “adequately protects human health and the environment from the harmful effects of pollution and waste” – and that the EPA could not have held that belief at the time of the decision.

MEG also said in the affidavit that the EPA approval also failed to account for the threatened Growling Grass Frog, which had been reported on a property next to the proposed dump site.

“Maddingley Brown Coal is aware of that fact and MEG communicated that face to the EPA prior to the making of the approval decision,” the document stated.

“Consideration of impacts of threatened species is a mandatory requirement of a lawful decision …including whether a plan adequately protects the environment from the harmful effects of pollution and waste.”

MEG said the frog was protected under the Victorian Flora and Fauna Guarantee Act as well as the Federal Environment Protection and Biodiversity Conservation Act.

A date for the first hearing has not been set.

MEG is a non-profit incorporates association founded in March 2009.

It comes after Bacchus Marsh Grammar launched similar action last week, outlining how the threat of soil dumping nearby was already affecting enrolments.

** PFAS are per- and polyfluoroalkyl substances. They are a group of man-made chemicals that have been used since the 1940s. They do not break down easily in the body or in the environment and can accumulate over time. PFAS can be found in stain- and water-repellent fabrics, Teflon and fire-fighting foams.

The tunnel project is now at least 10-months behind schedule and the cost has blown out by $3 billion.