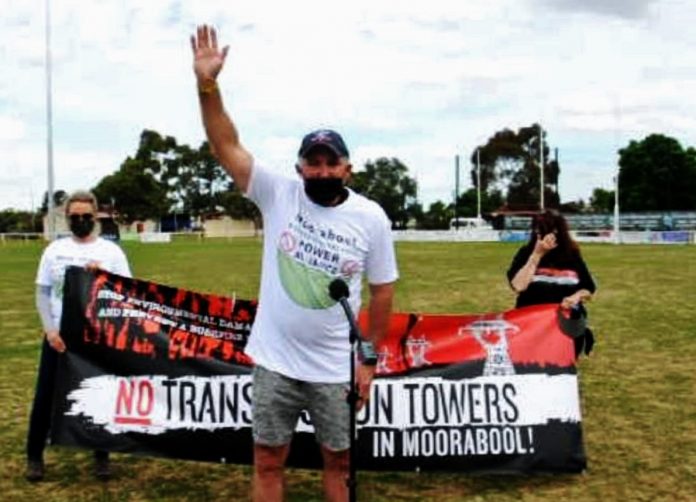 The Darley resident and former Footscray/Fitzroy player was part of a group of 40 protestors opposed to the 500kV overhead lines and turned up at a Darley Park Ausnet Services drop-in session this afternoon (Wednesday).

“Who knows what it’s going to do to the health of us – the people that live there now – and the future of our kids and grandkids.

“We don’t want it and it should go underground.”

Hawkins was the Bulldogs Best and Fairest winner in 1985 and represented Victoria five times.

Protestors formed an 80m line on the oval to show how high the tallest pylon would be. They also flew balloons on an 80m fishing line.

At least three of the 20 current Moorabool Council candidates attended. A fourth was present before the protest began but did not take part.

Moorabool and Central Highlands Power Alliance President Emma Muir said she was skeptical about the number of jobs the project would attract, saying many of the pylon and transmission line components would be made overseas.

The group is fighting the proposed 190km 500kV powerline from Sydenham to Bulgana which developers Ausnet Services and Mondo say will have pylons up to 80m high.

The project would also involve the creation of a new substation north of Ballarat – possibly in the Clarkes Hill area, where the line would be able to intersect with a Ballarat-Bendigo transmission line.

Ausnet spokesperson Helina Lilley said that of the five drop-in information sessions held so far, only Ballan and Darley had attracted protestors.

A sixth is planned for Melton next week, depending on COVID19 restrictions.

She said almost 3000 virtual pins had been dropped on an online map of the project’s area of interest – many of them related to biodiversity and culture.

Ms Lilley said overhead powerlines were the most economically sustainable method of carrying the high-voltage lines and people could still have their say through the Environmental Effects Statement process.

RELATED STORY: Time running out to have your say on transmission line area of interest

A map of the ‘narrowed down’ area of interest is expected to be released by the end of the year.