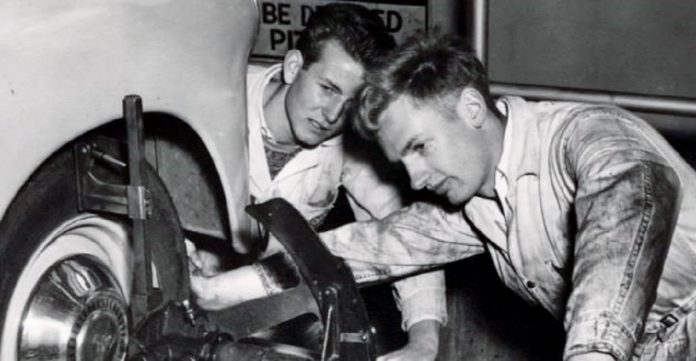 Bacchus Marsh sporting and business identity Paul Carey is being remembered as a caring soul who gave genuine friendship and was devoted to his family.

The 87-year-old died in Ballan on October 6 and leaves behind children John, Janice and Lynette – and survived wife Wendy, who died in 2012.

Paul was the son of Perc and Helen Carey and grew up in a version of Bacchus Marsh that is almost unrecognizable today.

He is the brother of Patricia and Peter.

Peter Carey is a New York-based Booker-prize winning author (Oscar & Lucinda, The True History of the Kelly Gang) who gave a recorded message at the memorial service, speaking of his older brother’s love of books and poems.

“He was funny and inventive – and little eccentric – and very very original.

“If he didn’t love his daddy so much he might have easily run away to be a writer.

“Sometimes I wish Leunig could have drawn him with his family in that little room between the kitchen and the living room with Wendy, Janice and John and Lyn.

“Leunig would have ‘got’ his constant references to The Magic Pudding…

“I will always the remember the home he and Wendy made in the same street in which he and Wendy had been born in.

“I’ll always remember the roses in the front – and the backyard that was made for kicking football end to end.

“When I last saw the old rooster he was frail – almost ethereal – but who could forget him playing football on the wing (in his younger years)?”

He described how Paul went to Geelong Grammar and felt like he “had been dropped into an alien planet, where the parents all spoke with English accents – yet he passed from one culture to another easily”.

Peter also described his brother working as an apprentice mechanic at the General Motors factory in Fishermens Bend – and later becoming the workshop manager at PS Carey Motors in Bacchus Marsh.

He said Paul owned cars including a Skoda and an FJ Holden.

“No longer is he to be seen crossing from the workshop to the spare parts department, a clipboard underneath his arm .

“No longer will I meet him in Melbourne – on Collins Street – slouch-hatted, peeling a banana as he hurried through the crowds.

“No longer will he be at bat, facing his little brother’s high-speed bowling at Torquay.”

Peter spoke of his brother making a kite for him there from paper and bamboo, which snapped and fell into the ocean, and was rescued by Paul who swam into the freezing water.

Peter and Paul also made home-made rafts from inner tubes and went fishing for flounder.

“It seems as if he is gone, but here he is – Paul John Warriner Carey – a part of every one of us for as long as we have to live.”

The online service was held on October 13 at Michael Crawford Funerals in Bacchus Marsh.