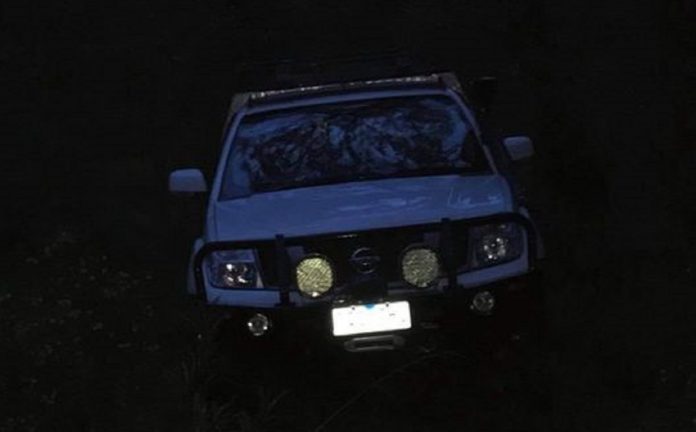 Bacchus Marsh detectives said a licence check was carried out on the Nissan (pictured above) at Anglesea around lunchtime – and the vehicle was registered to an address in the Geelong area.

At 6.40pm, a woman in Lal Lal said they saw sheds opened on a Coal Mine Rd property.

She saw the ute in trees nearby and photographed it.

When the two men in the car were approached, it’s alleged they told the woman they were waiting for a car to pass down the road after a series of robberies.

She also noted the ute’s numberplate and called Bacchus Marsh police around an hour later.

No offences have been detected at this stage.

The loitering car caused a flurry of activity on social media.

Police are encouraging people to ring triple-zero if they witness suspicious behaviour.

Anyone with information about last night’s loitering incident should call Gordon, Ballan or Bacchus Marsh police.

Moorabool Online is averaging 100,000 hits a month. Could your business benefit by being seen 100,000 times this month?  Contact: sales@mooraboolonline.com.au  .