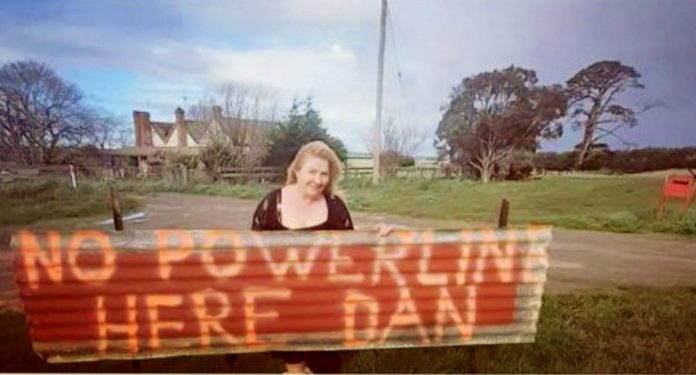 Serial anti-masker Lizzy Rose stopped on the corner of Ballan-Daylesford Rd and Race Course Rd (pictured) where the Keilor East woman was photographed with a corrugated iron sign reading ‘No Powerline here Dan’.

Police have been notified and said they would take action to fine her.

The image is understood to have been taken on Thursday August 20 was uploaded to Instagram on August 21 – the same day as a widely-circulated video where the describes losing her voice and her whole body aching after a ritual.

The post, which gives the location ‘Blackwood State Forest’ reads:

“Before you jump on the attack or wrongly assume. (sic) I have a workers (sic) permit which allows me to travel anywhere in VICTORIA legally.

“On my way back to Melbourne yesterday after our physical Ritual of Justice was cast deep into a lush forest to reveal the full extent of the corruption that is our government, I stopped at this property to show my support for this Victorian civilian.

“The Peoples (sic) Voice are standing up against this evil greedy dirty government.”

The post then continues with a rhyme on the theme of rights, muzzling and vaccinations.

Hashtags at the end of the post include other references to Baal, Freemasonry, deep state, corruption, Blackwood, Woodend and more.

Lizzy Rose made regular media appearances before the pandemic but hit the headlines when she filmed herself arguing with staff at Maribyrnong Bunnings, where she was not wearing a mask.

She was recorded speaking about COVID19 conspiracy theories as staff called police.

She later appeared on Nine’s Today Show but was cut off halfway through the interview, with Karl Stefanovic apologizing to viewers.

Last month she was fined by police for heading to Romsey to get her nails done. She told media at the time she believed she was allowed to travel outside the metropolitan lockdown zone because she was “studying”.

Woodlands ward councilor Lawry Borgelt said he urged everyone to follow the directive from the Chief Medical Officer and wear masks outside the home.

“It’s not only for their own safety and that of their loved ones, but to ease the burden on our frontline medical workers who are battling tirelessly to stem the tide of this pandemic,” he said.