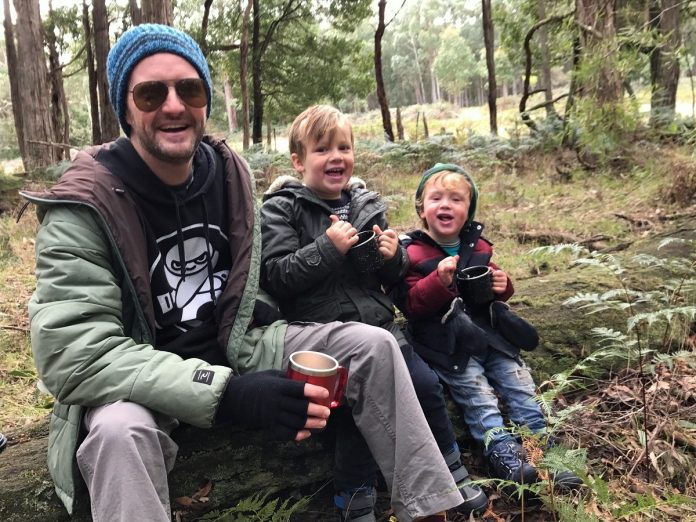 WHO KNEW THAT AUSSIE ACTOR STEPHEN CURRY AND HIS FAMILY HAD A BUSH BLOCK AT GORDON..?!

NOW THEIR SERENITY IS BEING THREATENED BY A PROPOSED TRANSMISSION LINE AND PYLONS UP TO 80M HIGH, TO CONNECT WINDFARM ELECTRICITY TO THE GRID IN MELBOURNE.

THE 190KM LINE WILL RUN FROM BULGANA, THROUGH CLARKES HILL, GREENDALE, MYRNIONG, DARLEY AND MELTON.

When did you hear about the Western Victoria Transmission Network project?

The first we heard about this was the day after a few of our neighbours in the Gordon area received a letter informing them of the proposed project.

We never received a letter, which seemed extremely concerning to us, considering that Ausnet claim to have not decided on an exact route for the powerlines.

We felt – and still feel – extremely disappointed in the lack of fair consultation and apparent disregard for the community at large.

How strongly do you feel about this?

While we understand and appreciate the need for renewable energy, my whole family echo the feelings of the community in our extreme resolve to find alternative means of carrying out this project in a fashion which doesn’t destroy this unique part of the world and the very livelihoods of those who live and work here.

What does the block mean to you?

Our block in Gordon is our family’s happy place.

It has held immense family importance for the entire lives of all my four siblings and our children.

We have all spent a large proportion of our lives there and to think of the thousands of native eucalypts, along with the abundance of native flora and fauna there being destroyed in the name of sustainability is nothing short of devastating.

How do you feel when you’re there?

When we are there we feel at peace.

We feel that we are part of the land and it is a part of us.

We have resident koalas, echidnas, kangaroos, wallabies, kookaburras, rosellas along with myriad other beautiful creatures that share the place with us.

While it’s only an hour from the centre of Melbourne, it feels like it’s a thousand miles from anywhere. A place of peace and tranquillity.

But for how much longer?

What is it like to see the powerlines issue unfold during the pandemic?

COVID has been an incredibly difficult time for everybody.

For Ausnet to have used it as an excuse for their failure to properly consult with the community feels like a real kick in the guts.

I believe they’ve heard of the internet, but I’m not entirely sure they know how to use it.

As someone who normally lives in Melbourne, would you be happy to pay a bit more for renewable power if the lines were underground?

I find it fascinating that this has been raised as one of the ‘cons’ of going underground.

It feels more like a scare-tactic than anything else.

For big business to use economic outcomes as an excuse for their plan is frankly absurd.

Has there been any consideration for the financial consequences for the potato farmers, the cattle farmers and the hundreds of landowners whose property prices will plummet if this plan goes ahead in its current form?

These people aren’t from the big end of town.

They’re honest, hard-working families who are simply entitled to a fair outcome.

Do you believe the price can be absorbed some other way?

I think if Ausnet and the State Government are legitimately interested in the future of renewable energy, which we all need to be, they’ll find a way to subsidise this work to ensure that the financial burden is not worn solely by those in the firing line.

Not only is that a fairer, more just way of achieving renewable goals, it will set a precedent that this will not continue to happen to rural landowners all around the country in the name of urban dwellers getting cheaper electricity.

Do you believe the natural beauty of the Moorabool region is under-rated?

I think the sheer majesty of the Moorabool region must be extremely under-rated if this is, as many people fear, a ‘fait au complet’.

This would never happen in the Dandenong Ranges, the Blue Mountains, the Grampians.

But I also feel that this is somewhat of a moot point, as the people who drew up these plans have most likely never seen it  – apart from on Google Maps.

The plans were drawn up elsewhere, with consideration only to financial gain and ease of completion.

One thing that Google Maps doesn’t show is the natural beauty and abundance of any particular area – nor does it show the strength and passion of a community – and this particular community has those qualities in spades.

None of us will be giving up without a fight.

We are simply asking for fair consultation, genuine consideration for safer, more realistic outcomes and above all- a fair go.

What message do you have for the people of Moorabool?

We are in this together. We have each others’ backs.

Let’s not give this up without a fight.

Today it’s our community, tomorrow it will be someone else’s.

Together we can make a change for good and protect what is right and fair.

Let’s not get mad – let’s get organised.

STEPHEN CURRY BEGAN HIS CAREER IN 1992 WITH THE TV SERIES LATE FOR SCHOOL. HE IS BEST KNOWN FOR PLAYING NARRATOR DALE KERRIGAN IN THE CASTLE (1997) AND GRAHAM KENNEDY IN THE KING (2007). THE MELBOURNE ACTOR HAS ALSO APPEARED ON GOOD GUYS, BAD GUYS, BLUE HEELERS, NEIGHBOURS, DAY OF THE ROSES, THE WOG BOY, CHANGI, THE NUGGET, McLEODS DAUGHTERS, THE SECRET LIFE OF US, THE CUP, RAKE, CLIFFY, FAT TONY & CO AND MANY MORE.