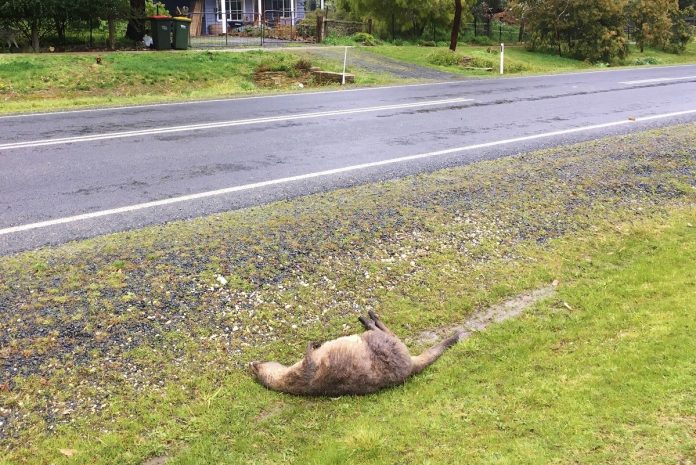 A Mt Egerton woman wants more wildlife warning signs after spending two hours in the dark, looking after a kangaroo hit by a car.

Ruth Callander said she heard the sadly-familiar thump of a ute colliding with an Eastern Grey at 5am yesterday (Monday) – and said neighbours were increasingly facing the same issue.

“Mt Egerton has no wildlife warning signs on its roads – and I don’t think there are many around Gordon either,” the Main Rd resident said.

“We need several yellow-diamond-shaped warning signs as you come into Mt Egerton. There’s now a mob of about 30 kangaroos living in the middle of town, near the battery dam.”

Ms Callander also pleaded with drivers to slow down.

“There are 50km/h speed signs at the entrances to town, but cars and trucks just speed through here at 80 to 100km/h.

“I reckon if they sent a speed camera up here for the day, (the operators) would make a mint!.”

She said kangaroos were commonly seen on the Council-managed road at dawn, dusk and even in thick fog.

“There’s quite a surprising amount of wildlife here for a built-up area. We’ve even had echidnas and koalas in our yard.”

Ms Callander also raised concerns about wood ducks living in a nearby dam that had also been hit.

“We love the animals here in Mt Egerton but if people don’t care about wildlife, they should at least care about their cars being pranged.”

She praised the work of BADGAR, who came to the injured kangaroo’s aid early Monday.

“They were wonderful. I was so relieved when they arrived. The kangaroo had been there for two hours.”

It did not have a joey and has since been euthanized.