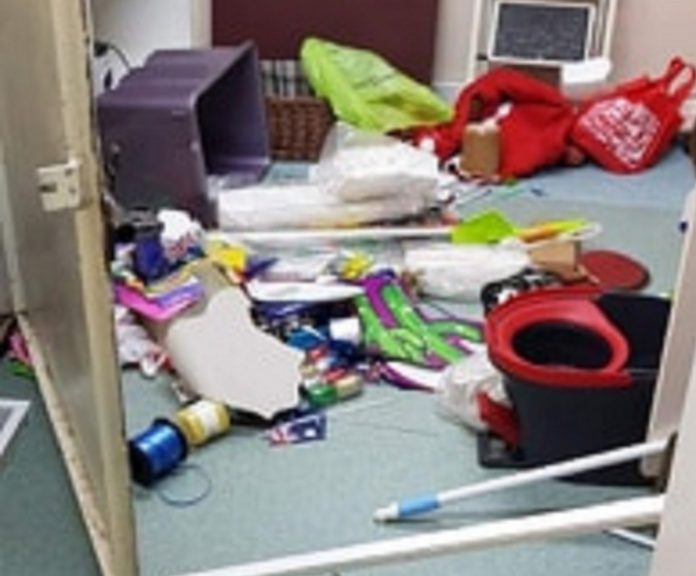 Heartbroken committee members have spent more than four hours cleaning up decades of local sports history after a burglary and vandalism spree at the Bacchus Marsh football/netball clubrooms.

Police believe the break-in happened just after dark on Thursday July 2, with the mess discovered early the next day.

“The rooms had broken windows, graffiti and although we don’t believe they took much, there were trophies on the ground as well as original footballs and cricket balls from premiership games thrown around,” Mr Farrell said.

“We have contents insurance, but things like the 2016 premiership cup, 2018 reserves cup and the under-16s cup you just can’t replace.

“The 1977 Maddingley football club flag and Cup was also left on the ground.

“That was particularly devastating for our Secretary Maria Dickson because she’s been part of the club for so long.

“Her family was heavily involved in Maddingley before it merged to become Bacchus Marsh.

Mr Farrell said there was evidence the vandals had tried to light fires in two of the premiership cups.

Tags with the words ‘F9 Boys Crew’ were also left inside and outside the Maddingley Park clubrooms.

Mr Farrell said the burglars consumed food and drink, throwing other items from the fridge around the rooms.

Coloured function lights and ‘disco’ lights were also tampered with.

“We had passers-by report seeing them on late Thursday (July 2).

“They even got into a room that we allow a local mothers group to use free of charge with their babies. They just threw the arts and crafts materials everywhere.”

The Cobras are now organizing for trophies to be repaired where possible and jumpers and jackets to be re-framed.

Anyone with information should call Bacchus Marsh Police on 5366 4500

Exposure sites added, Other sites not