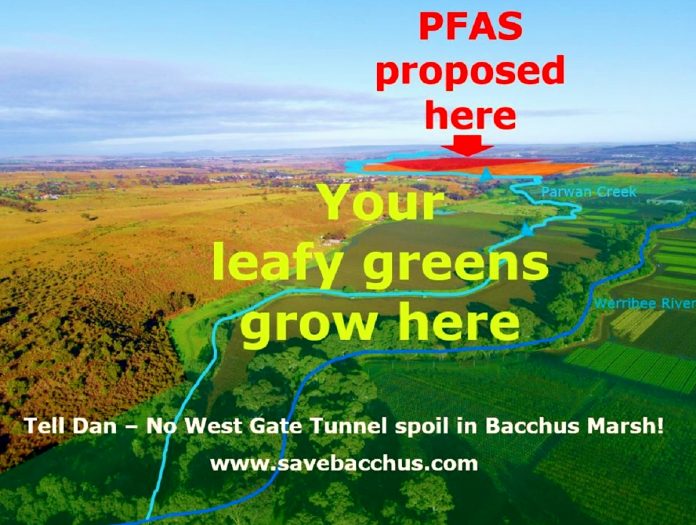 The State Government has been accused of setting up exemptions that effectively allow the dumping of PFAS-contaminated West Gate Tunnel soil at Maddingley.

The State Opposition says the only exemption that remains under the Environment Protection Act 1970 is the requirement for an approved environmental management plan.

“Most will be kept secret by special exemptions for so-called commercially sensitive information.

“Community consultation has been ditched.

“The special regulations make no mention of any requirement for community consultation or consultation with affected councils.

“He has stripped away basic democratic rights.”

The changed regulations will also affect Bacchus Marsh Grammar, which is 470m from the landfill.

Mr Davis said the changes allow for the transport, processing and dumping of soil up to 200m from “any building that is a sensitive land use, including a residential dwelling, a health service, a childcare centre or an education centre”.

“This effectively gives the Government and its Transurban mates the ability to process and dump toxic PFAS contaminated soil close to childcare, schools, houses and health services at will,” Mr Davis said.

“It gives the green light to dumping at Bacchus Marsh, Bulla and Ravenhall as Daniel Andrews sees fit with virtually no checks and balances and no community consultation whatsoever.

“The new requirements are so weak as to render the Environment Protection Act meaningless. It’s a special deal to allow Daniel Andrews’ mates to pollute, virtually unchecked.”

The State Opposition also criticised the lack of landfill levies charged to the West Gate Tunnel builders – calling it “a gift of hundreds of millions of dollars”.

Western Victorian Liberal MLC Bev McArthur said the Bacchus Marsh community had fought hard to protect their homes, schools and farms from the threat of contaminated soil being trucked in.

“They have every right to be furious,” she said.

** Meanwhile, a rarely-seen frog could stop the toxic dumping before it begins.

The Victorian Biodiversity Atlas has records of endangered Growling Grass Frogs in the Parwan Creek and on the property next to the landfill.

The endangered status of the frogs means that the issue is likely to be referred for Federal assessment under the Environmental Protection and Biodiversity Conservation Act 1999.

“They’re an important population because the species is in decline in this region,” Moorabool Environment Group Acting Chair Jodie Valpied said.

“Hearing frogs in a river or creek is a good sign of a healthy environment.”

“Michaela was very interested in the waterways aspect of this project – and both have promised to take our concerns to State Planning Minister Richard Wynne,” she said.

RELATED STORY: Toxic soil trucks in our Avenue every 6 mins, 24/7