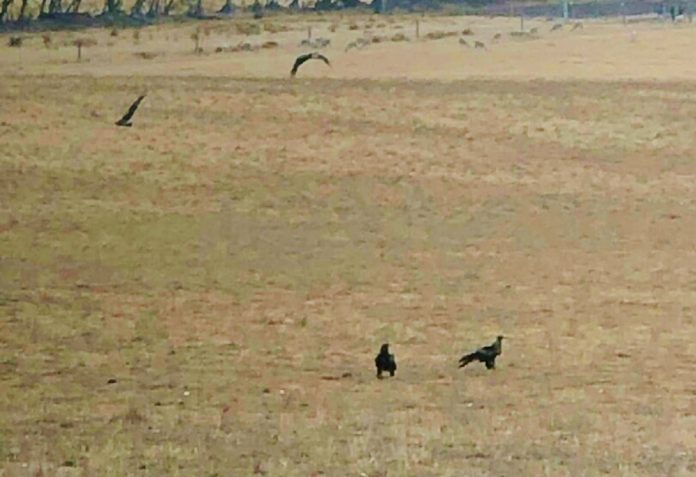 A farmer north of Ballan says he fears for the future of Wedge Tailed Eagles that nest on his property if a 500kV electrical transmission line is erected overhead.

Gerald ‘Arch’ Conroy said his family had farmed in Stonehut Lane, Bunding for 120 years and the species had always lived on his 11ha property.

“They’ve been here for as along as I can remember and there is a tree on my property where they nest each year,” he said.

“They have a range of 50 sq km but they always come back here to raise their young.”

He has named one of the eagles ‘Mondo’ after a company involved in the Western Victoria Transmission Network project, which is due to be built between Sydnenham and Bulgana in 2022-2025.

Mondo’s mate and two offspring spent an extended period near the nest last year (main image) due to the drought.

“I’ve seen them fly incredibly high – hundreds of metres up – then they see a rabbit and dive-bomb it at high speed.

“What worries me is that eagles get caught in powerlines doing this. All they focus on is the prey, not the lines.

“Cars and transmission lines are the number-one killers of Wedge Tailed Eagles.”

Mr Conroy said while he had received a letter about the proposed transmission lines, neighbours on either side had not.

He also expressed concerns about the future of a private wildlife corridor which backs onto the Werribee River.

“It’s a haven for frogs; a habitat for platypus; it’s the only recorded place in Ballan with wombats – and there are about 50 kangaroos.”

“Not everyone has them (on their land) – and once they nest, you just leave them alone or you risk them just leaving their eggs and not coming back.

“We give them space and they’re happy to stay.”

Mr Conroy has made several submissions to the transmission network project – mainly based on local flora and fauna.

All up, locals have pin-pointed almost 900 places of interest on the project website

“If you live in Melbourne and buy a house near big electrical powerlines, it’s a choice,” he said.

“In our situation, we don’t have a choice.

“You can’t grow anything under them or do anything that’s seen as a fire risk.”

Project organisers say the 190km powerline route has not been finalized and community consultation will be ongoing.

Go to https://www.westvictnp.com.au/get-involved/ to find the Zoom link.

RELATED STORY: MP in Ballan Thursday to hear about powerlines