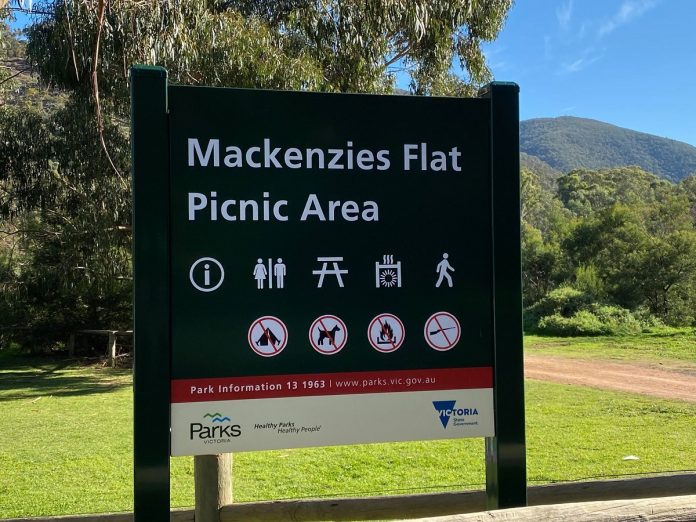 A drug-affected man who used a fake gun to rob a group of terrified students visiting MacKenzies Flat has been sentenced to a total of 5-and-a-half-years in prison.

Michael Shalders will serve a non-parole period of 3-years and 4-months after pleading guilty to charges including armed robbery, theft and committing an indictable offence while on bail.

The Melbourne County Court has heard that on 21 May 2018 the then-26-year-old asked a friend to drive him from Melton South to Lerderderg Gorge – and to return to pick him up later.

Judge Martine Marich told the court Shalders took the imitation gun for self-protection during what was an intended drug purchase.

The court was told that around 6pm four students returned from a walk, with Shalders asking them for a ‘joint’ in the carpark.

Ms Marich said he began following them, asking who would be driving their 2004 Camry.

“You then subjected them to a terrifying ordeal,” she said.

“You produced (the) imitation firearm from the pocket of your hoodie. It had a silver barrel, 6 to 8 inches long.

“At this time you were a prohibited person – having been subject to a Family Violence Intervention Order.

“You then pointed your imitation firearm at the complainants and demanded they give you the keys to their vehicle and their mobile phones.

“The group did not respond immediately.

“You then pointed the gun at (one of the students) forehead and demanded the keys from him.

“He told you that he did not have the keys and turned out his pockets to show you.

“You then pointed the gun even closer to his forehead and made further demands.”

The court was told another student threw his mobile and keys to Shalders, who then sped off in the Camry.

The students hid in the bush, in the dark, calling triple-zero.

Police arrived at 6.50pm but could not find the group.

Ten minutes later the students walked out of the bush with their hands in the air before they were taken to Bacchus Marsh police station.

On June 3, police found Shalders with the missing keys in Bacchus Marsh. They also found Facebook images of the imitation gun the students had described.

In a victim impact statement, one of the students said having what he believed to be a real gun put his head had affected him profoundly.

The Judge said the victim now felt unsafe travelling and being approached by strangers, he had lost his appetite and struggled to study.

“He used to feel helpless and hopeless throughout the day and even medication did not help him.

“He would feel very stressed and anxious and he used to re-experience those events every day. He was later diagnosed with PTSD.”

The court heard Shalders grew up in Taylors Lakes, was a talented footballer and suffered ADHD, learning difficulties and anxiety.

He was a qualified diesel mechanic but became unemployed 6 months before the Darley incident due to escalating drug use.

Ms Marich said Shalders began using drugs at 17 and turned to ice “because it gave him focus and stopped his fidgeting” – although his family were not aware of his habit until he was 22.

“Your drug use was a slow spiral out of control,” the judge said.

“The more you used, the harder your life became.

“You lost your one and only love, you lost your group of friends from high school – then you were caught driving on drugs and lost your licence.

“Your older sister has told me you had given up – you had lost everything – and you couldn’t see a way out.

“She says that since you’ve been on remand, the ‘loveable you’ has come back.

“Jail has allowed you to rest, clear your mind, reflect on your actions and figure out a way to restart your life.”

The judge said Shalders showed remorse, had completed as many courses as possible while in custody and had family members willing to visit and support him after release.