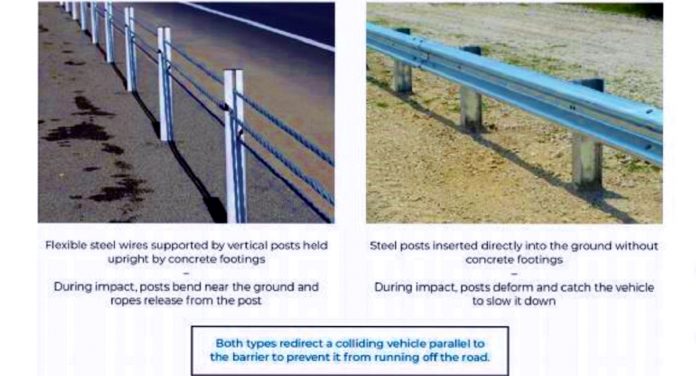 The Victorian Auditor General has criticized the rollout of wire rope barriers across country Victoria, singling out a Geelong-Bacchus Marsh Rd project for cost blowouts and delays lasting years.

VAGO’s ‘Safety on Victoria’s Roads’ report said 12km of barriers between the corners of Ballan Rd (Balliang East) and Woolpack Rd (Maddingley) were approved for $10 million in funds with a limited description from VicRoads.

A project to install barriers on the Midland Highway between Ballarat and Creswick had even less detail.

“These project proposals did not specify the specific length of barrier that needed to be installed,” the report said.

“While VicRoads scope approval reports and presentations sometimes contained more information about a project’s design and cost, it was not able to provide these to us for 12 of the 27 projects (under the program).

“Insufficient detail in project planning can lead to costs blowing out.

“The costs of 11 of the 27 projects increased from their proposals, with one requiring a 77 percent funding increase from $20 million to $35.4 million.”

A joint committee also found that evidence of planning for environmental issues and project risk could only be found for six of the 27 projects over the four years.

This led to more costs blowouts when barriers had to be modified after they were installed.

In one example, the CFA raised concerns about barriers on the Calder Fwy at Elphinstone which were later renovated to include an extra emergency crossover area.

The three-part Geelong-Bacchus Marsh Rd project was also singled out for the longest delays.

According to the report they were due to start in 2017 but didn’t get going until January 2020.

One part of the project is due to be finished in February 2021 – a blowout of 20-months – making it very last Victorian rollout due to be completed.

“VicRoads advised that this delay is due to environmental approvals taking longer to obtain than it expected,” the report said.

“Specifically VicRoads needed to obtain an approval under the Federal Environmental Protection and Biodiversity Conservation Act 1999 because installing barriers on sections of this road would have had a significant impact on the environment.

“(VicRoads) advised that it did not expect this to take two years to obtain.”

Geelong-Bacchus Marsh was chosen by VicRoads after it calculated that wire rope barriers would reduce 90 percent of serious casualty crashes. The report authors said VicRoads could not give them evidence to show how this was calculated.

They were also critical of passenger car data being referenced, with little information on the safety of other road users such as motorcyclists and truck drivers.

The joint committee also noted many of the Wire Rope Barrier projects suffered a lack of documentation.

However the report found consultation and design details had since been improved for barrier projects, allowing VicRoads to have a more accurate idea of costs and timeframes.

The original $450 million rollout  – funded by the Transport Accident Commission – is now estimated to cost $550 million.

The installation of the road safety treatments was part of the TAC’s Towards Zero Strategy and Action Plan 2016-2020.

** Do you have a story to tell? Send your tips to news@mooraboolonline.com.au or message us via Moorabool Online on Facebook