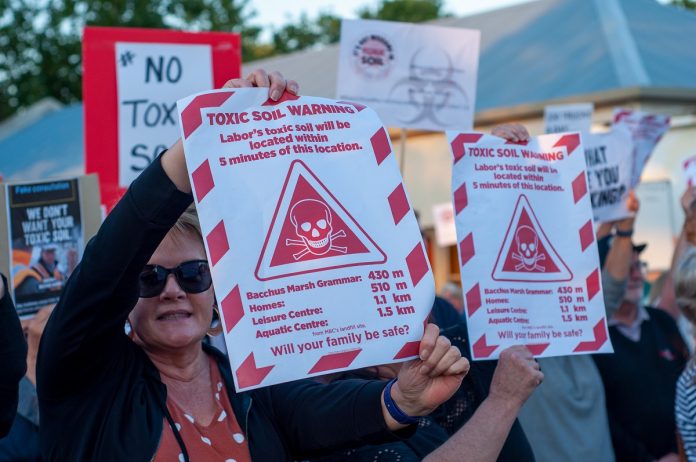 Protestors are on standby after a war of words over the dumping of soil from the Westgate Tunnel project in Bacchus Marsh.

Insiders who had spoken to the Bacchus Marsh Says No to Toxic Waste group alleged that soil from the project would be dumped at a disused coal mine in Maddingley, with trucks rolling in from Monday (15 June).

However a spokesperson for Maddingley Brown Coal – the owners of the landfill – said the claims were not true:

REPORTS THAT MBC IS RECEIVING WESTGATE TUNNEL SPOIL FROM MONDAY ARE FALSE.
MBC HAS APPLIED FOR PLANNING AND ENVIRONMENTAL APPROVALS TO BUILD A FACILITY TO RECEIVE TO RECEIVE PROJECT SPOIL, AND WILL ONLY RECEIVE IT AFTER THE RELEVANT APPROVALS HAVE BEEN GRANTED AND A CONTRACT IS SIGNED.

TRANSURBAN’S BUILDER CPB-JOHN HOLLAND HAS ALL OF THE APPROVALS IT NEEDS TO DISPOSE OF SOIL CURRENTLY STOCKPILED ON THE PROJECT’S SITES.
THE GOVERNMENT HAS ALWAYS SAID THEY SHOULD DO THIS AS SOON AS POSSIBLE.
VICTORIA HAS DOZENS OF FACILITIES THAT CAN ACCEPT CATEGORY-C HAZARDOUS WASTE.
WHERE CPB-JOHN HOLLAND CHOOSE TO TAKE THIS MATERIAL IS A MATTER FOR THEM AND THE SITE SEEKING TO RECEIVE THE MATERIAL.

Protest group spokesperson Kat Barlow said at this stage they would take no action on Monday, but were watching the situation closely.

The group is upset that soil possibly containing an unknown amount of PFAS could end up flowing down the Parwan Creek and into the Werribee River, close to where much of Melbourne’s fresh produce is grown.

She said Moorabool Council still did not have all the documents it needed to make a proper decision on any permit and that the community had not been consulted.

Transurban was contacted for comment and referred enquiries to MBC.

MBC has referred media enquiries to The Civic Group, who released a two-sentence statement via SMS on Friday afternoon.

Related: Fears toxic soil reports may never be made public