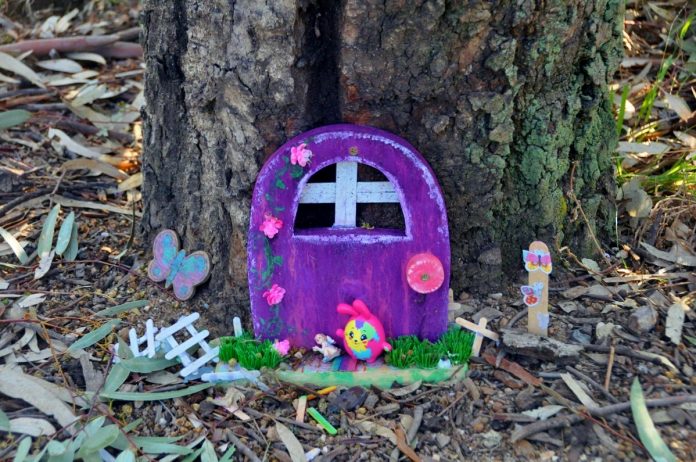 A Bacchus Marsh man is using his woodwork skills to create a bit of impromptu joy during lockdown.

Colin Bailey has spent the last few weeks installing creations inspired by fairy tales and nursery rhymes along a walk beside the Werribee River in Peppertree Park.

“I’ve got a sailing ship I’ve just made – that’ll go out soon – and I’m also looking doing three houses along theme of the Three Little Pigs,” he said.

“I started doing all this at home just before Christmas. Whenever it’s too wet to work outside I go into the garage and make something.

“The kids get so excited when they see a new fairy house and often you see the parents singing the nursery rhymes to the kids in prams.

So far at least 14 tiny homes, doors, clocks and more have found their way into Peppertree Park.

“I’ve noticed some new homes with dolls, farms, plastic animals and so on further down the track.

“I have no idea who’s putting them there.

Later Colin hopes to do some football-themed woodwork miniatures for the oval close to the Grant St swimming pool.

“Most of the material is recycled.  I get it from places like Bunnings where they have old pallets,” he said.

“I’m also aiming to make things childproof. For example, one of the homes is a castle with a drawbridge – and I’ve made it so the drawbridge is still intact.”

Mr Bailey began his career as an engineering patternmaker, designing and making packaging for biscuits, chocolates, margarine and more.

He went on to become a woodwork teacher, working what was then called Bacchus Marsh Secondary College.

He worked his way up to become principal of the Darley junior campus (now the Moorabool Shire Office) and took an early retirement package.

But since then he’s given the Duracell Bunny a run for its money.

“I went back as a teacher at the same school for four years, then I was at Mowbray College part-time. Later I taught at the Brethren school in Melton, in Caroline Springs- and also at the Catholic Regional College in St Albans.

“I also did a short course at The Laurels in horticulture and now I’m working part-time, helping people with their gardens.”

Mr Bailey also volunteers at Pentland Primary, where his grandchildren are enrolled.

“If you look at all the older people in the town who are volunteering, it’s amazing. There is so much grey power behind so many events.”