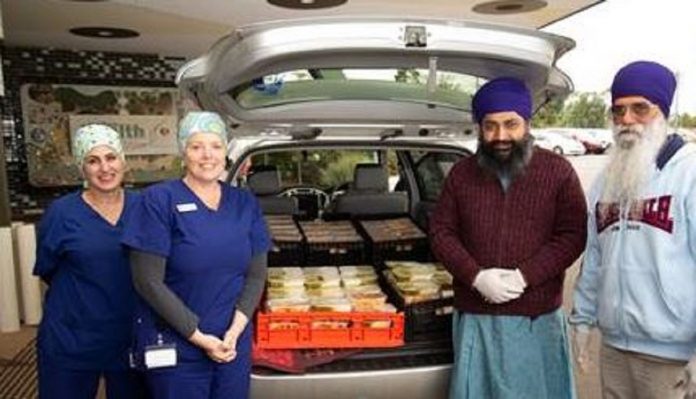 Belinda Scott is not your average CEO.

While staff at Djerriwarrh Health Services have been sweating on a Western Health amalgamation – and then thrown in the deep end with an unprecedented pandemic – she (pictured 2nd from left) has been delivering bread, milk and chocolates to staff in self-isolation.

“The staff at Bacchus Marsh and Melton have responded amazingly to COVID19,” she said.

“For a little health service, I believe we have pulled together really well.”

At its worst, executive staff at DjHS worked 24-days without a break.

“It really was all hands on deck.”

One of their busiest services has been a drive-through COVID19 testing station in Barries Rd Melton, where up until today (Thursday) 7331 people have been screened and 5800 swabbed.

It is the second busiest clinic in the Grampians region and one of few drive-through clinics across Victoria.

“I think its been really successful because people are worried about standing in a queue or waiting room to be tested and possibly catching the illness from someone if they don’t have it already.

“Our staff have been so dedicated. People have been out there in the carpark in the dark and in pelting rain.

“The community has been great too.

“One driver who’d been swabbed in the rain the night before came back the next day with 20 boxes of roses!”

Other members of the public have dropped off cooked meals or hand-stitched theatre caps for health workers.

Ms Scott said the Barries Rd site was designed for people who were mildly unwell, work in high-risk situations or who just want to get tested for peace of mind.

“At the moment we’re really encouraging teachers to get tested. You don’t have to call first. Just drop-in at the drive-through.

“We’re open from 9am-7pm weekdays and 9am-5pm weekends.  Our hours suit busy working people so we’re seeing cars come in from as far as Taylors Hill and Ballan.

“Sometimes there’s a wait, so please be patient.”

People experiencing severe symptoms are being encouraged to come into the hospital instead.

The test results are processed by Australian Clinical Labs, who Ms Scott said would normally handle up to 3500 pathology tests a day.

These days they are sometimes being inundated with more than 5000.

“We then call each person and give them their result. We also ask how they’re feeling and check on their wellbeing.

“If they test positive, we encourage them to do something called Hospital in the Home.

“We are only a small service, so we don’t have a lot of beds and we need to be innovative.”

While laws forbade her from revealing how many COVID19 cases have gone through DjHS, people are given a blood oxygen monitor and thermometer. Nurses call every day to check figures and how patients are going.

“People love it. If they’re worried about anything they can ask questions.

“They feel supported – and its so much better for the patient if they can recover in their own environment.

“For people who do end up with COVID19, the message from us is that you’ll be cared for and we’re here to help.”

Ms Scott said in one case a staffmember who was self-isolating with four children began to run out of food.

“I got cereal, bread, milk, chocolates and a magazine for her and took it round – then sent a text for her to pick it up in the driveway.

“We’ve also done hampers and care-packages for staff who’ve had to isolate.

“Around 75 percent of our workers live in the local community, so this sort of thing is really important.”

The Chief Executive breathed a sigh of relief after an asymptomatic staffmember at Grant Lodge tested positive, but all other staff and patients tested negative.

“I think the likely reason it didn’t get passed on was because she wasn’t coughing and spluttering, which is one of the main ways the illness can be passed on.

“She volunteered to be tested because she knew she worked with vulnerable people.  I’m really happy with the way staff and the community have responded.”

COVID19 has also affected the hospital in other ways.

DjHS now prepares Meals on Wheels for the entire Moorabool Shire – and since the pandemic, the service has switched from fresh to frozen meal deliveries every second day.   Ms Scott said the number of meals had risen 10 percent since early March.

And what does she think of Queensland’s Chief Health Officer slapping Moorabool with “hotspot” status?

“I find that fascinating.

“Melton has certainly seen a rise in numbers because of the Cedar Meats outbreak in Brooklyn. Some workers come from Melton (which is also classed as a hotspot)

“I don’t know about Moorabool. It’s had 2 COVID19 cases and both are clear now.

“Maybe our Council could extend an invitation for the Queensland Chief Health Officer to visit. Moorabool really is a beautiful region.”

To help with the diagnosis and contact tracing of future COVID19 cases, every person entering the Bacchus Marsh or Melton hospitals must have their temperature taken and fill out a form.

If they’re all clear, they must wear a sticker.

That includes the CEO.

“I think my record is about five times in one day,” Ms Scott said.

“It helps us to understand who’s in the building and when they were screened.”

She has no doubt there could be more cases to come and is urging the community to download the COVID app and avoid more than 15 minutes of face-to-face contact with others.

“So many turn up to work for family or economic reasons, even if they’re unwell. They really need to think about just staying home.”

And what of that Western Health amalgamation now?

“I really want to thank staff who were facing hard times and job uncertainty at the start of the year.

“Djerriwarrh was looking at amalgamation and community consultation was in progress. That whole issue has now been put on hold.”