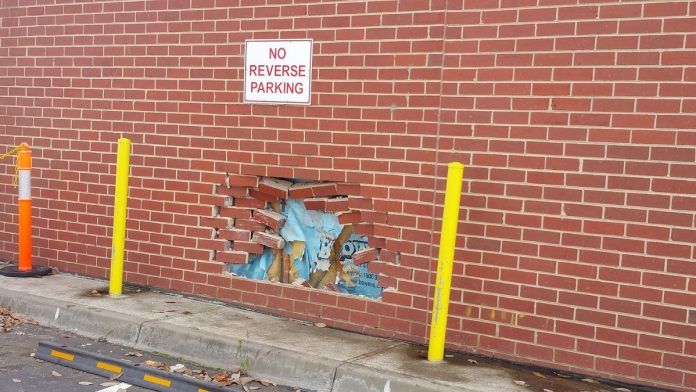 Ballan Community House is counting the damage bill, after a P-plate driver crashed through its office wall at on Tuesday.

No one was inside at the time of the crash, which was reported to the CFA at 6.30pm.

The car surged forward into the wall, between two bollards in the neighbouring supermarket carpark, underneath a sign asking drivers not to reverse park.

Community House staff found a wall and electrical wires damaged this morning, as well as furniture broken and upended.  The damage has also affected the office ceiling.

Staff said they thought they had been burgled at first.

“We’ll probably have to move the office to another part of the (Mechanics Hall) complex for a while,” Manager Lyn Plummer said.

“We were about to announce our new programs.

Community House staff spend much of Tuesday trying to work out which insurance company would pay for repairs.

The driver was covered by AAMI, who wanted to hear from the building’s insurer.

The Ballan Mechanics Hall complex is Crown Land overseen by DELWP, but staff said it was insured via Moorabool Council.

** Have you got a story? Save our contacts into your mobile phone and get in touch — news@mooraboolonline.com.au