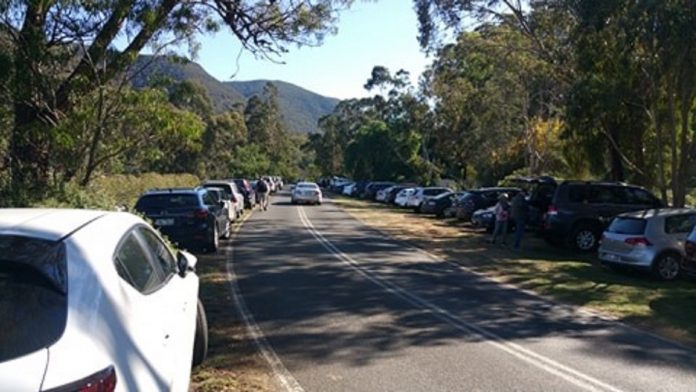 The Werribee Gorge and Lerderderg state parks have experienced some of their biggest visitor numbers in living memory.

Cars were parked nose-to-tail on both sides of Myers Rd (pictured below) at least half a kilometre beyond the Werribee Gorge park boundary on Saturday – and again on Sunday – as COVID19 restrictions were eased slightly and the temperature soared into the high teens.

It was a similar story on Lerderderg Gorge Road (top), with at least 150 cars parked beyond the state park boundary at lunchtime on Sunday.

In some cases social distancing was not adhered to.

In both areas dozens of cars were also seen turning around and exiting as soon as they arrived.

Bacchus Marsh Police said they were keeping an eye on the areas.

Visitors have been banned from using facilities and tracks in State and National Parks since early April.

Parks Victoria says it is monitoring visitation rates with the possibility of further changes, pending advice from health authorities.

It also says at this stage groups may number no more than 10 and people must keep a distance of 1.5m from others at all times.

Nine sites in Victoria are still closed to the public including the Princess Margaret Rose Caves, Twelve Apostles lookouts and Lara’s Serendip Sanctuary.